Forbey often teased his mom, Mary Anna Forbey, that he got more mail from Peggy, his girlfriend, or that his mom might miss sending a letter one day. Despite this, it is likely Mary Anna wrote him the most letters to while he was serving in the Navy. Frank Jr. even noted this himself in a letter saying so. Mary Anna often scolds her son in her letters to him about spending “too much time worried about girls”. Despite the teasing, her letters were filled with love, signing off with “oodles and gobs of love”, “heaps of love” and various other signatures. She would keep him informed about the day to day life and current events around Charleston, Missouri. 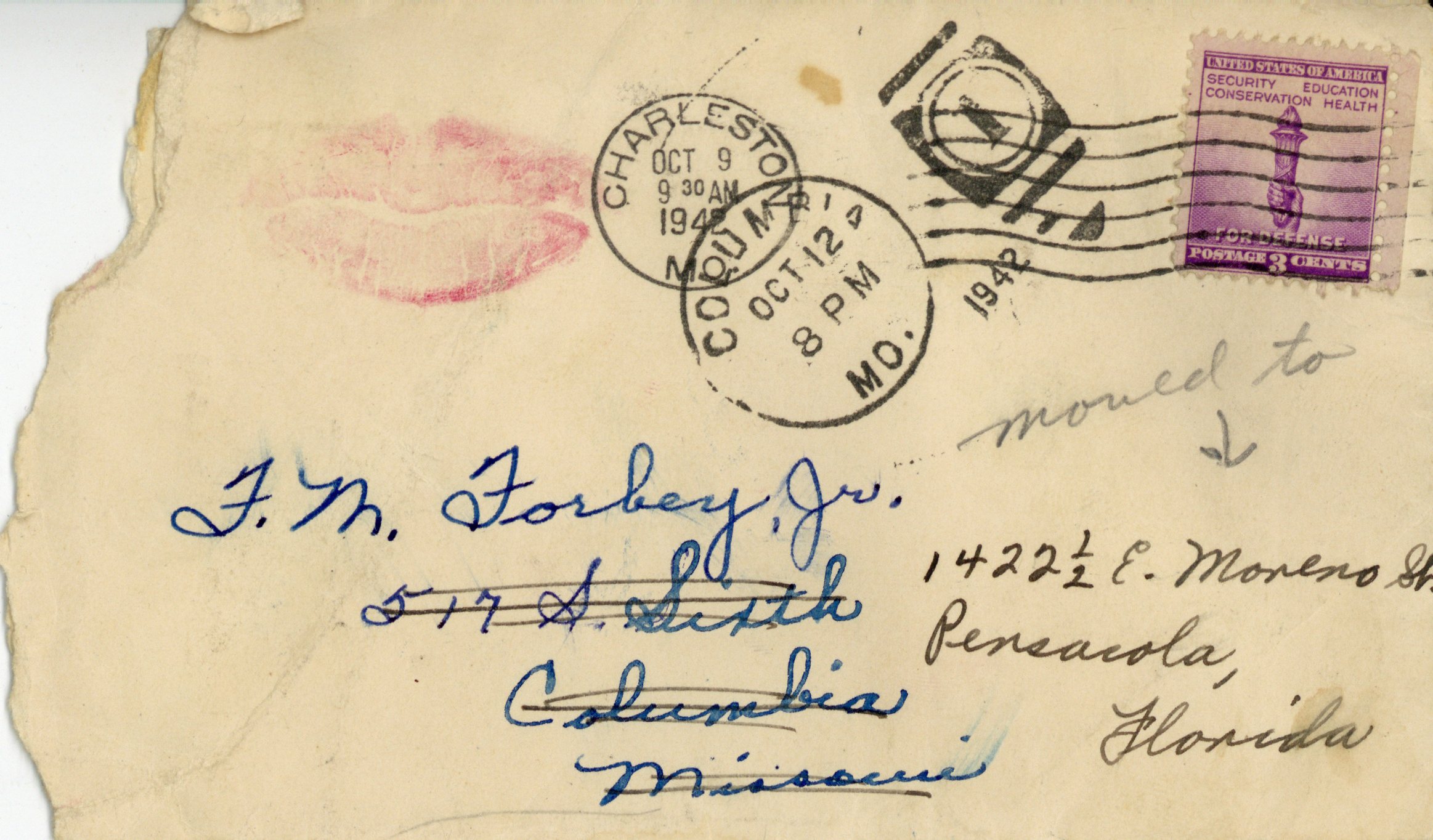 Forbey’s mother, Mary Anna, would sometime kiss the envelopes of letters she has written before sending them. The bright lipstick stain on the envelope can still be seen today. 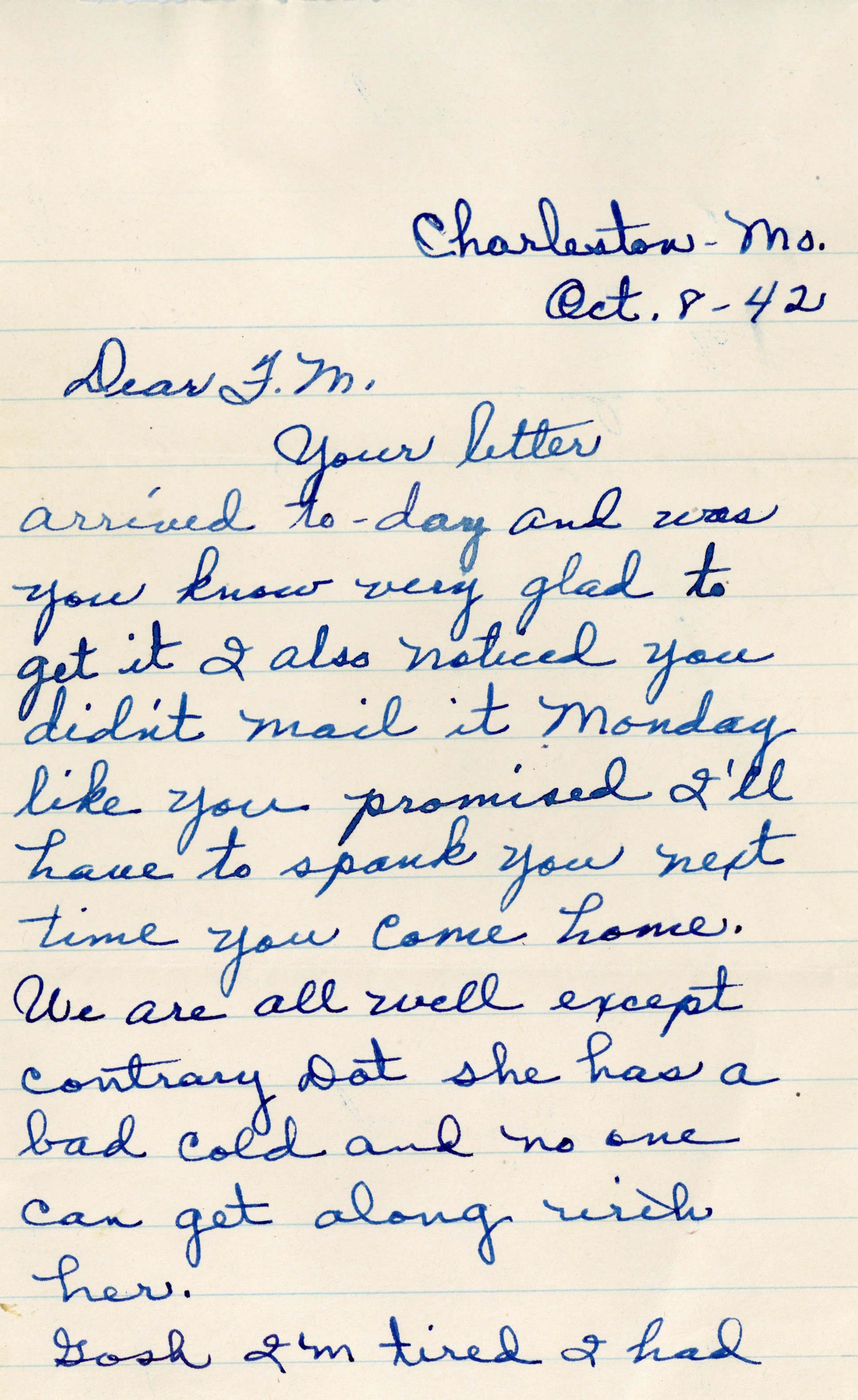 Your letter arrived to-day and was you know very glad to get it I also noticed you didn’t mail it Monday like you promised I’ll have to spank you next time you come home. We are all well here except contrary Dot she has a bad cold and no one can get along with her. Gosh I’m tired I had 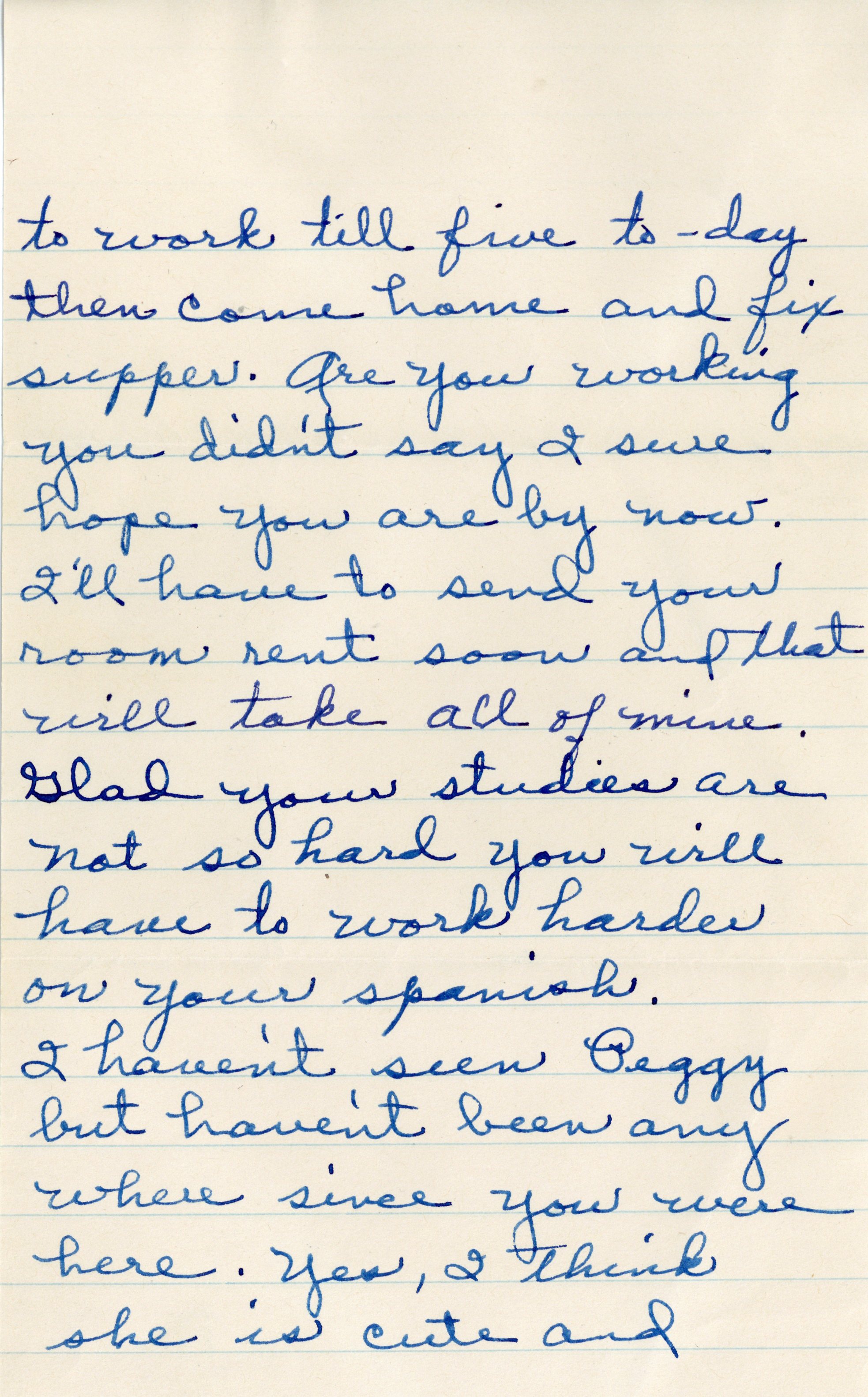 to work till five to-day then come home and fix supper. Are you working you didn’t say I sure hope you are by now. I’ll have to send your room rent soon and that will take all of mine. Glad your studies are not so hard you will have to work harder on your Spanish.

I haven’t seen Peggy but haven’t been any where since you were here. Yes, I think she is cute and 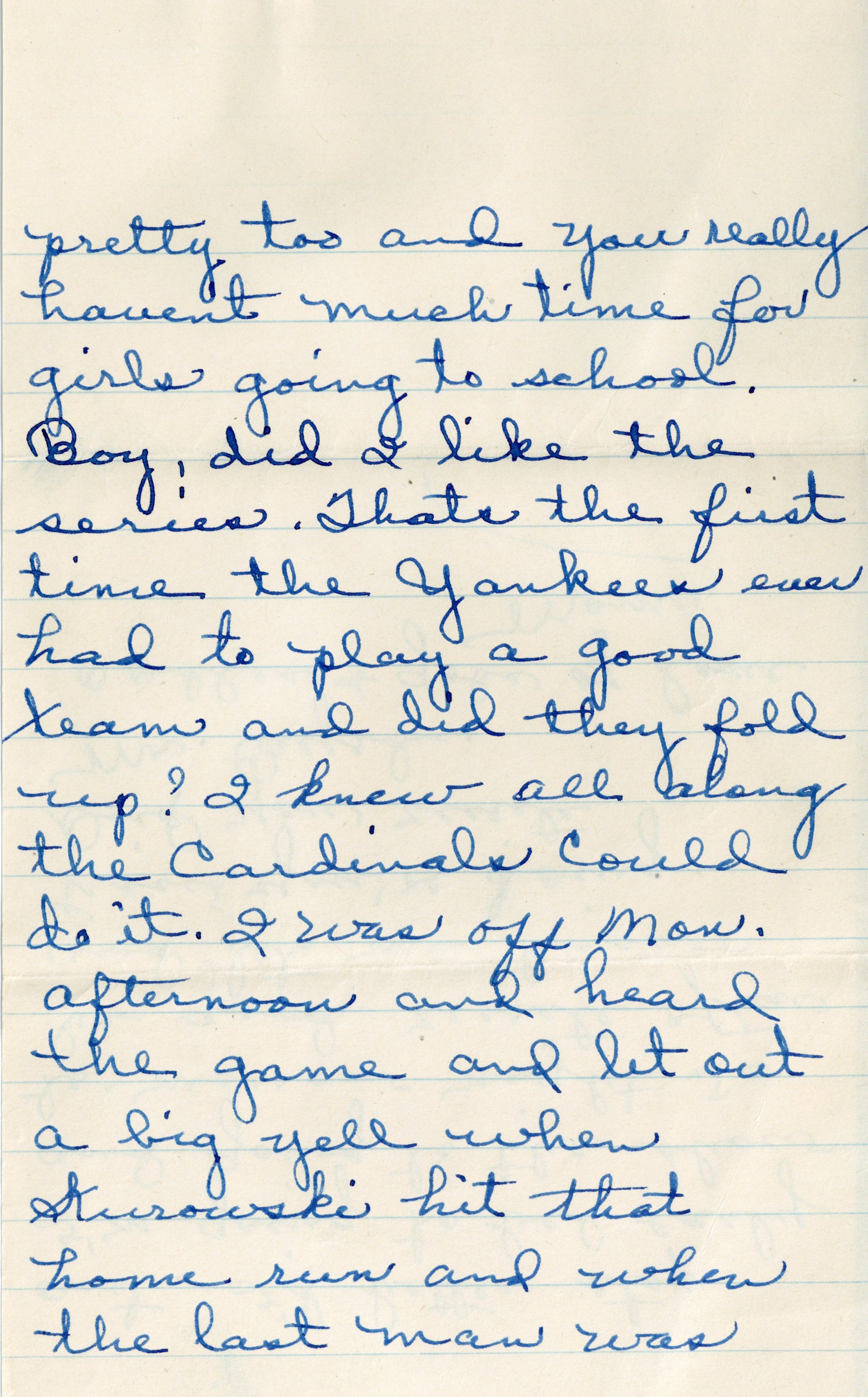 pretty too and you really haven’t much time for girls going to school.

Boy, did I like the series. Thats the first time the Yankees even had to play a godo team and did they fold up? I knew all along the Cardinals could do it. I was off Mon. afternoon and let out a big yell when Kurowski hit that home run and when the last man was 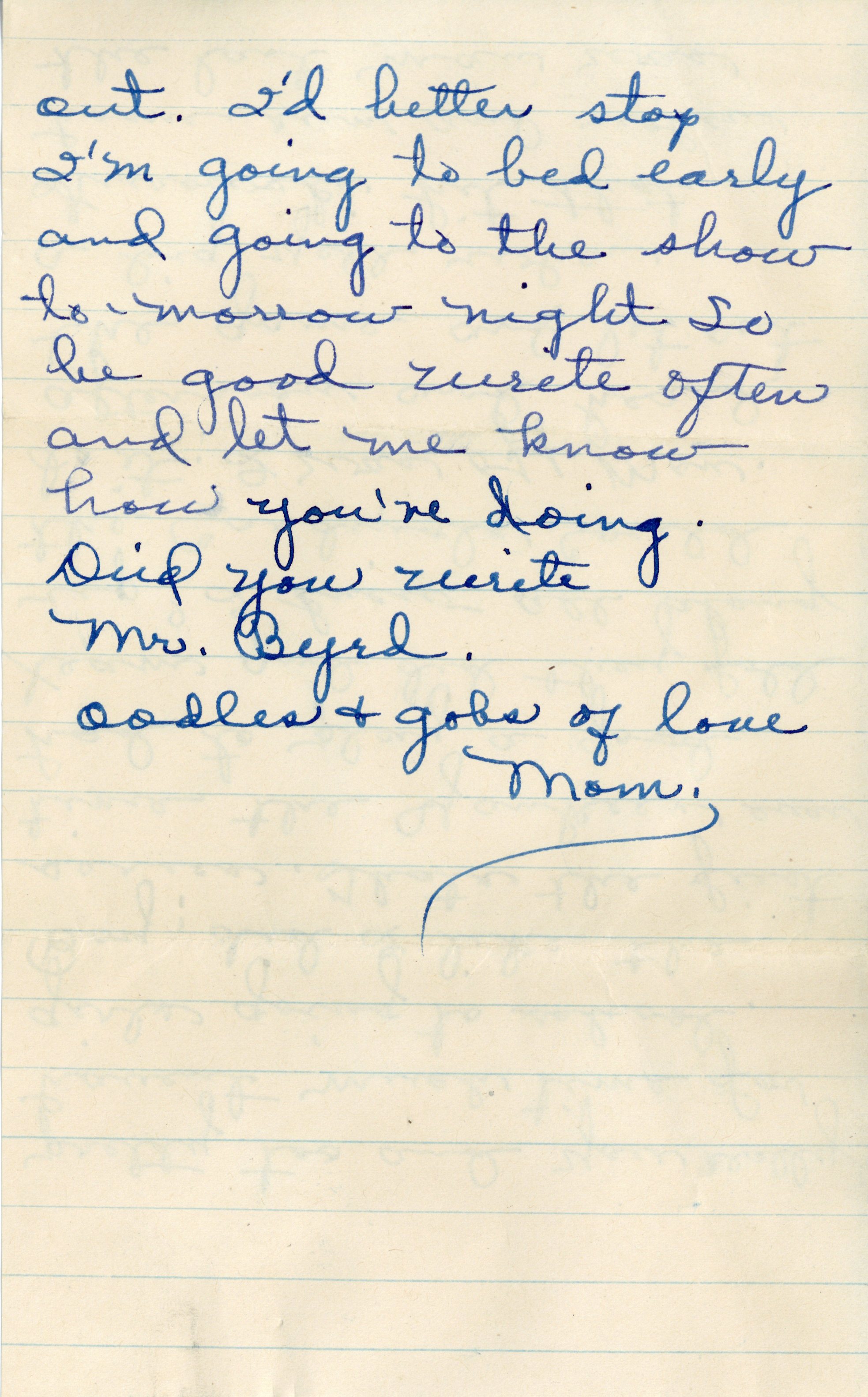 out. I’d better stop I’m going to bed early and going to the show to – morrow night so be good write often and let me know how you’re doing. Did you write Mr. Byrd.

Oodles and gobs of love

Forbey wrote a letter just to his mother after not receiving letters from his “sweetheart” (Peggy) for several days. Forbey tells his mother he has a boil on his face and the doctor tells him to be careful because an infection on the face can be dangerous. 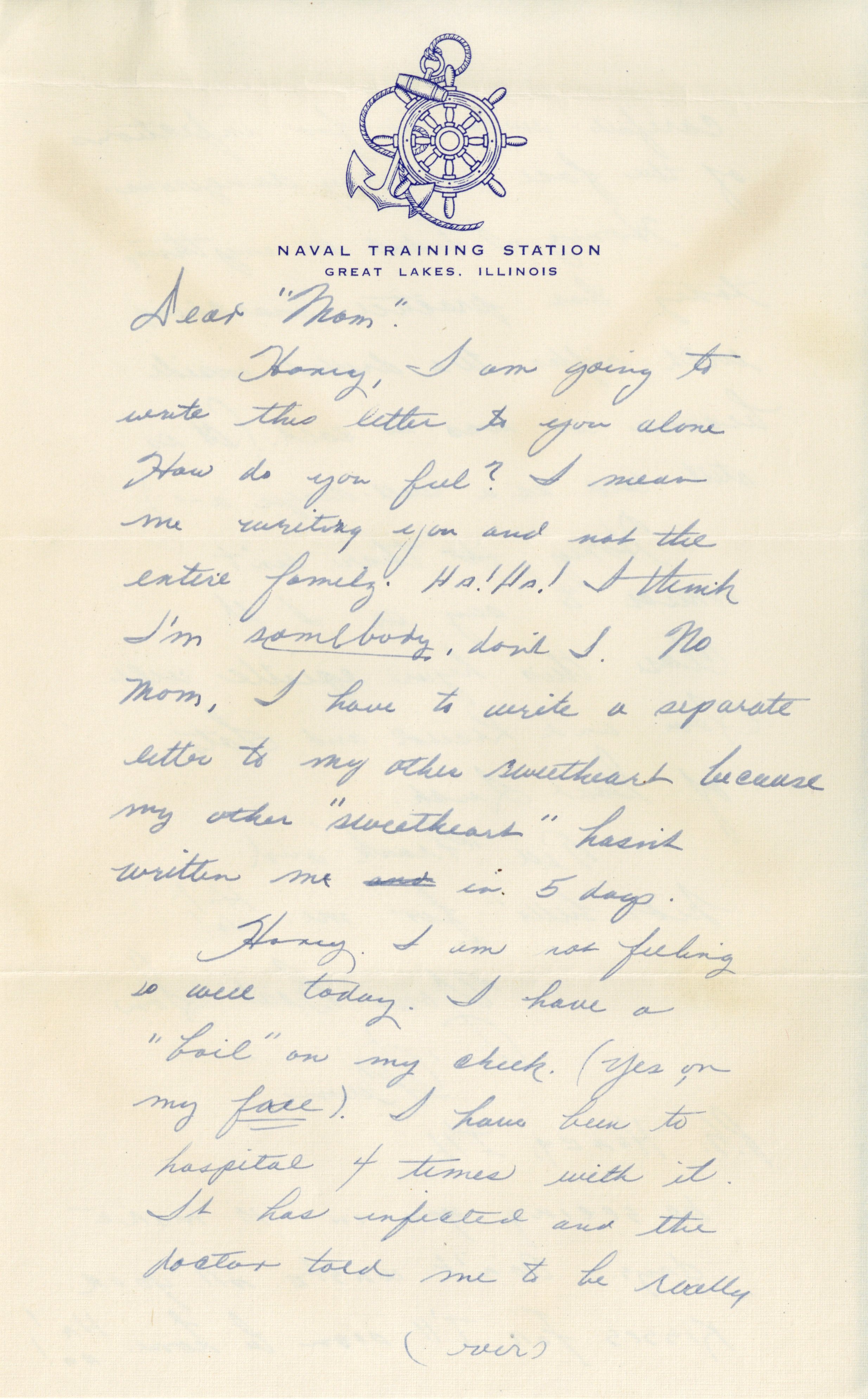 Honey, I am going to write this letter to you alone

How do you feel? I mean me writing you and not the entire family. Ha! Ha! I think I’m somebody, don’t I. No mom, I have to write a separate letter to my other sweetheart because my other “sweetheart” hasn’t written me in 5 days.

Honey I am not feeling so well today. I have a “boil” on my cheek. (yes, on my face). I have been to hospital 4 times with it. It has infected and the doctor told me & he really 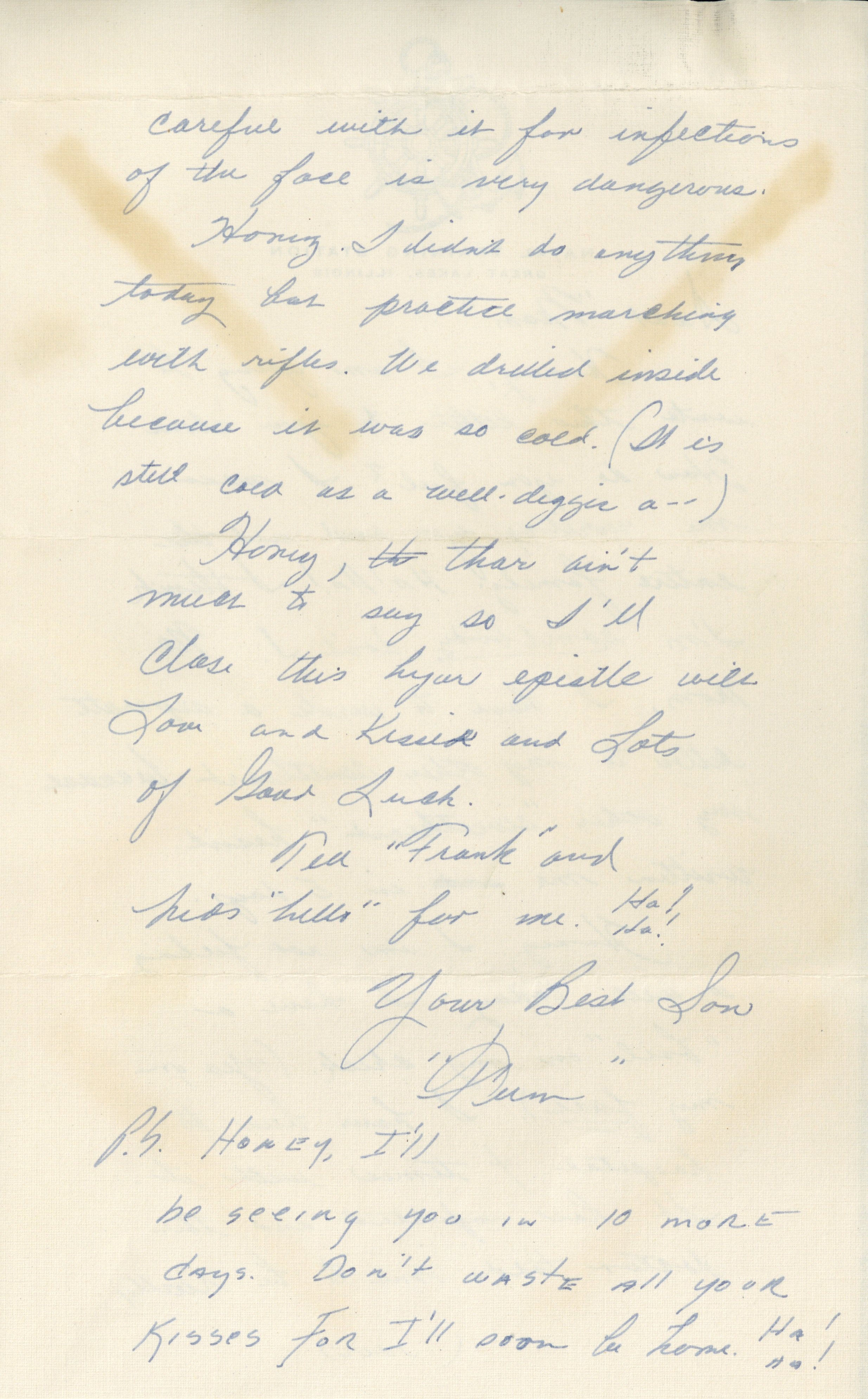 Careful with it for infections of the face is very dangerous.

Honey I didn’t do anything today for practice (?) with rifles. We drilled inside because it was so cold. (It is still cold as a well-digger a - - )

Honey, th there ain’t much to say so I’ll close this (?) epistle with

Love and Kisses and Lots of Good Lcuk.

During the time Forbey wrote this letter, he was only days away from getting to go home to visit his family. In this letter, Forbey wished his mother a good birthday and mentioned he will be graduating soon. Forbey would often write letters addressed only to his mother. 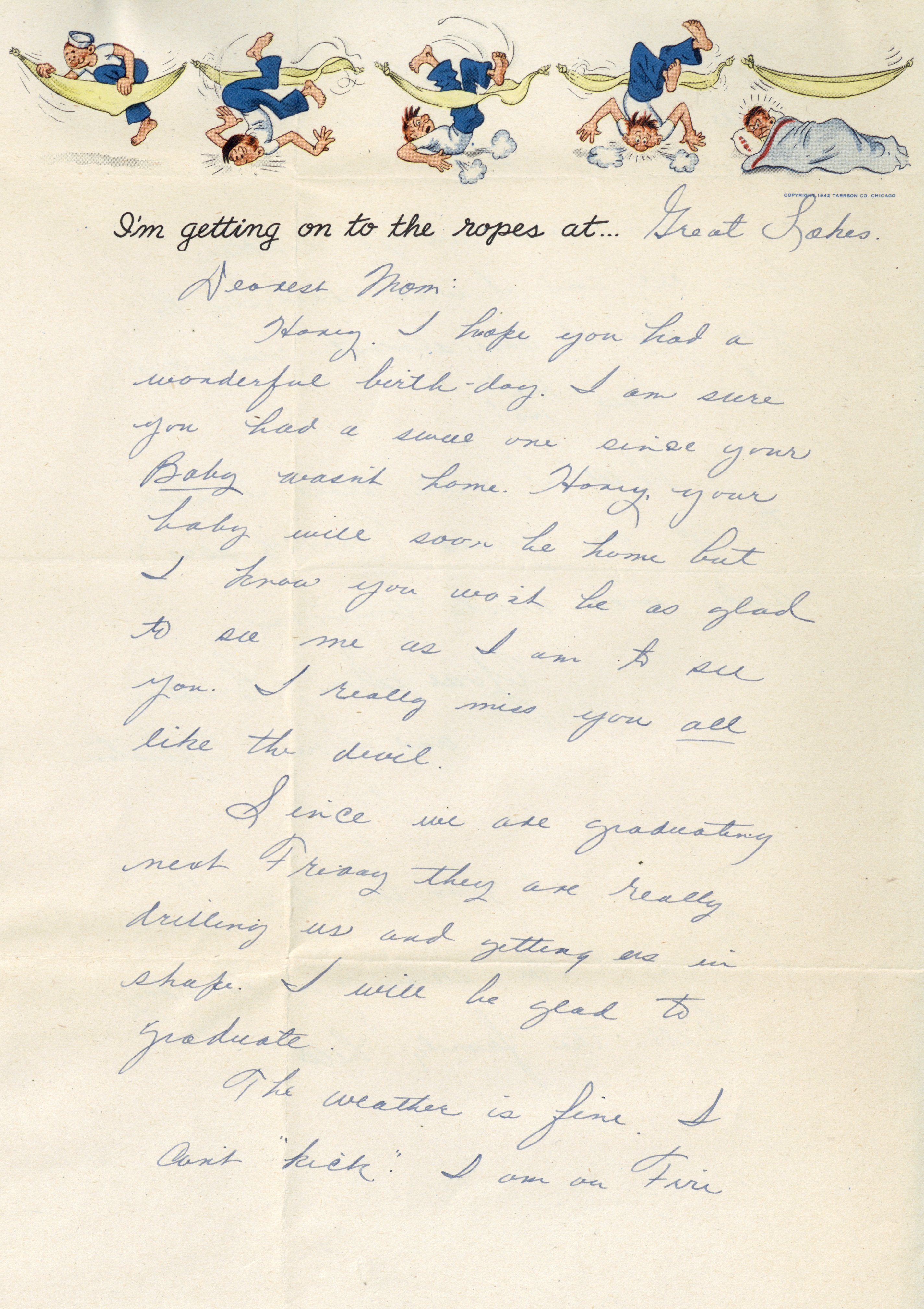 Honey I hope you had a wonderful birth-day. I am sure you had a swell one since your Baby wasn’t home. Honey, your baby will soon be home but I know you won’t be so glad to see me as I am to see you. I really miss you all like the devil.

Since we are graduating next Friday they are really drilling us and getting us in shape. I will be glad to graduate. The weather is fine. 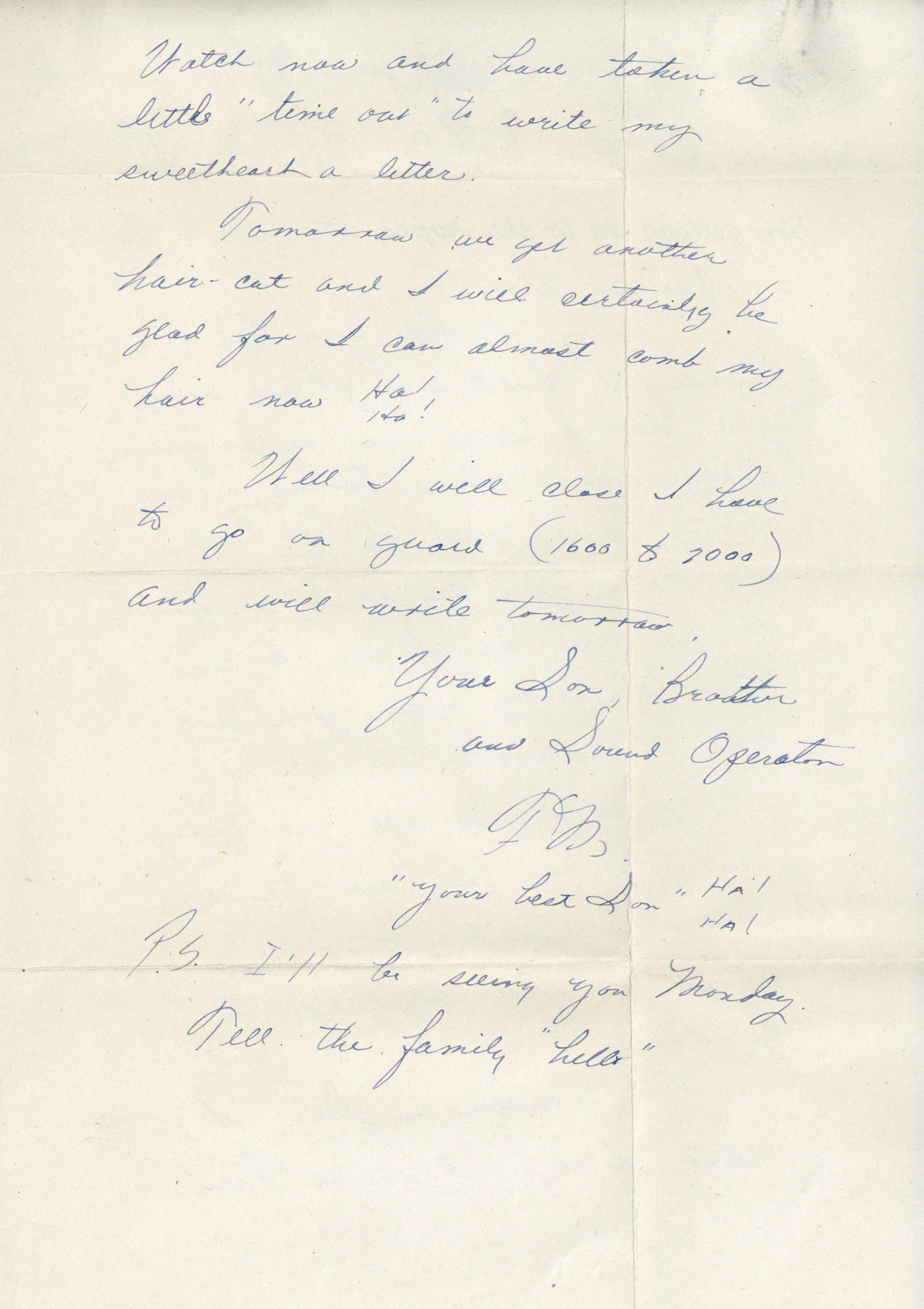 Watch now and have taken a little “time out” to write my sweetheart a letter.

Tomorrow we get another hair-cut and I will certainly be glad for I can almost comb my hair now Ha! Ha!

P.S. I’ll be seeing you Monday. Tell the family “hello” 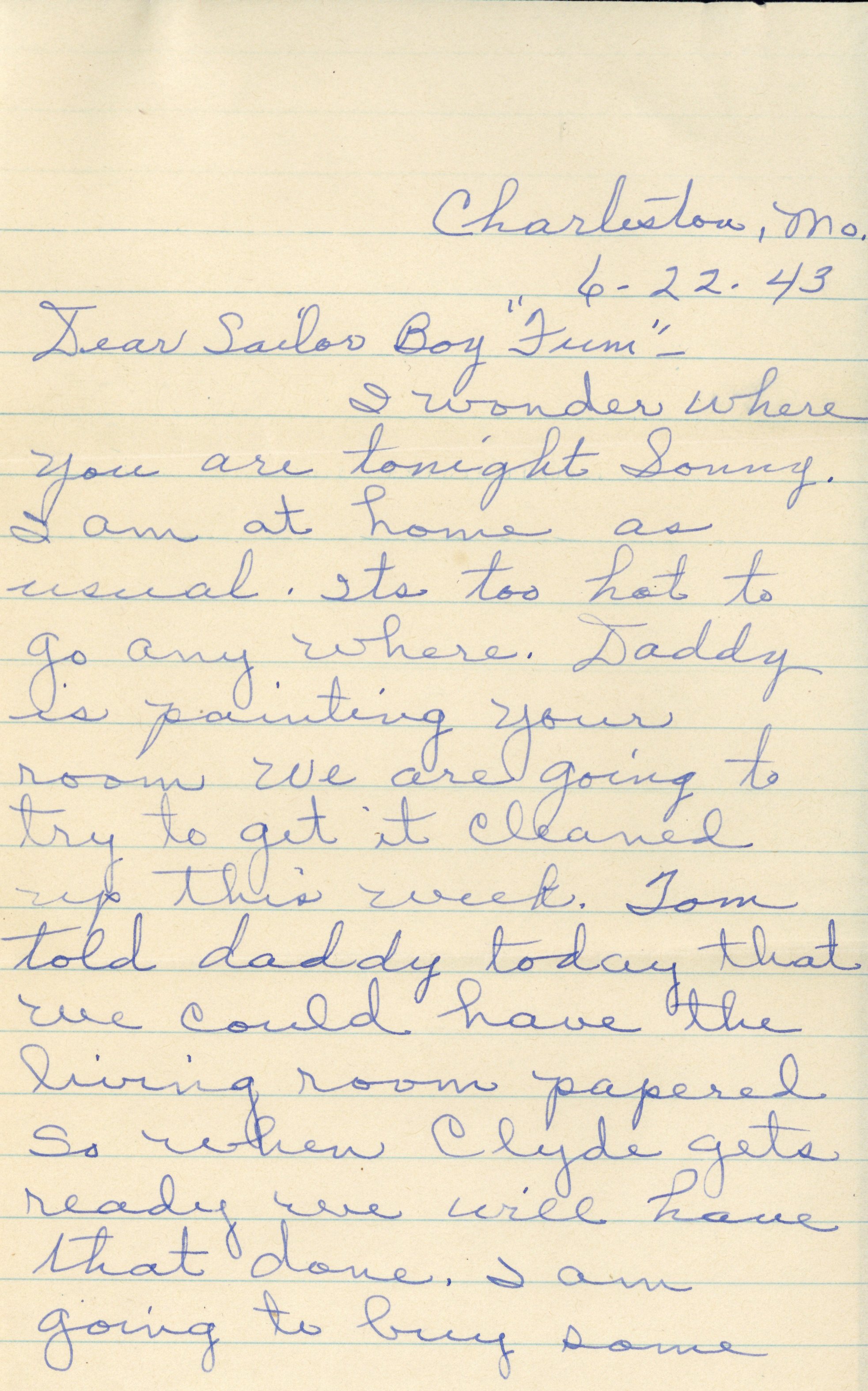 I wonder where you are tonight Sonny. I am at home as usual. Its too hot to go any where. Daddy is painting your room we are going to try to get it cleaned up this week. Tom told daddy today that we could have the living room papered so when Clyde gets ready we will have that done. I am going to buy some 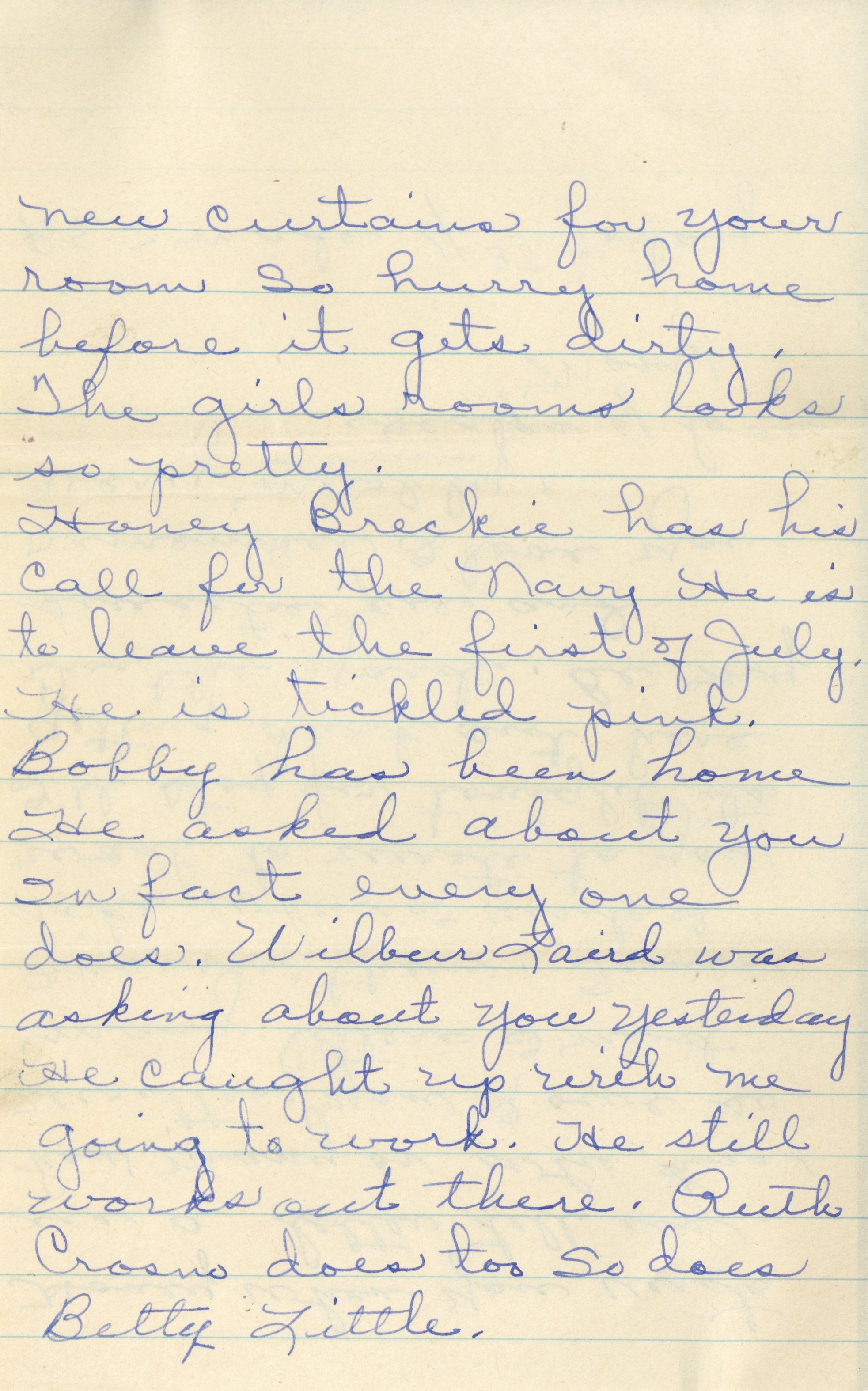 new curtains for your room so hurry home before it gets dirty. The girls room looks so pretty.

Honey Breckie has his call for the Navy He is to leave the first of July. He is tickled pink. Bobby has been home He asked about you in fact every one does. Wilber Laird was asking about you yesterday He caught up with me going to work. He still works out there. Ruth Crosno does too so does Betty Little. 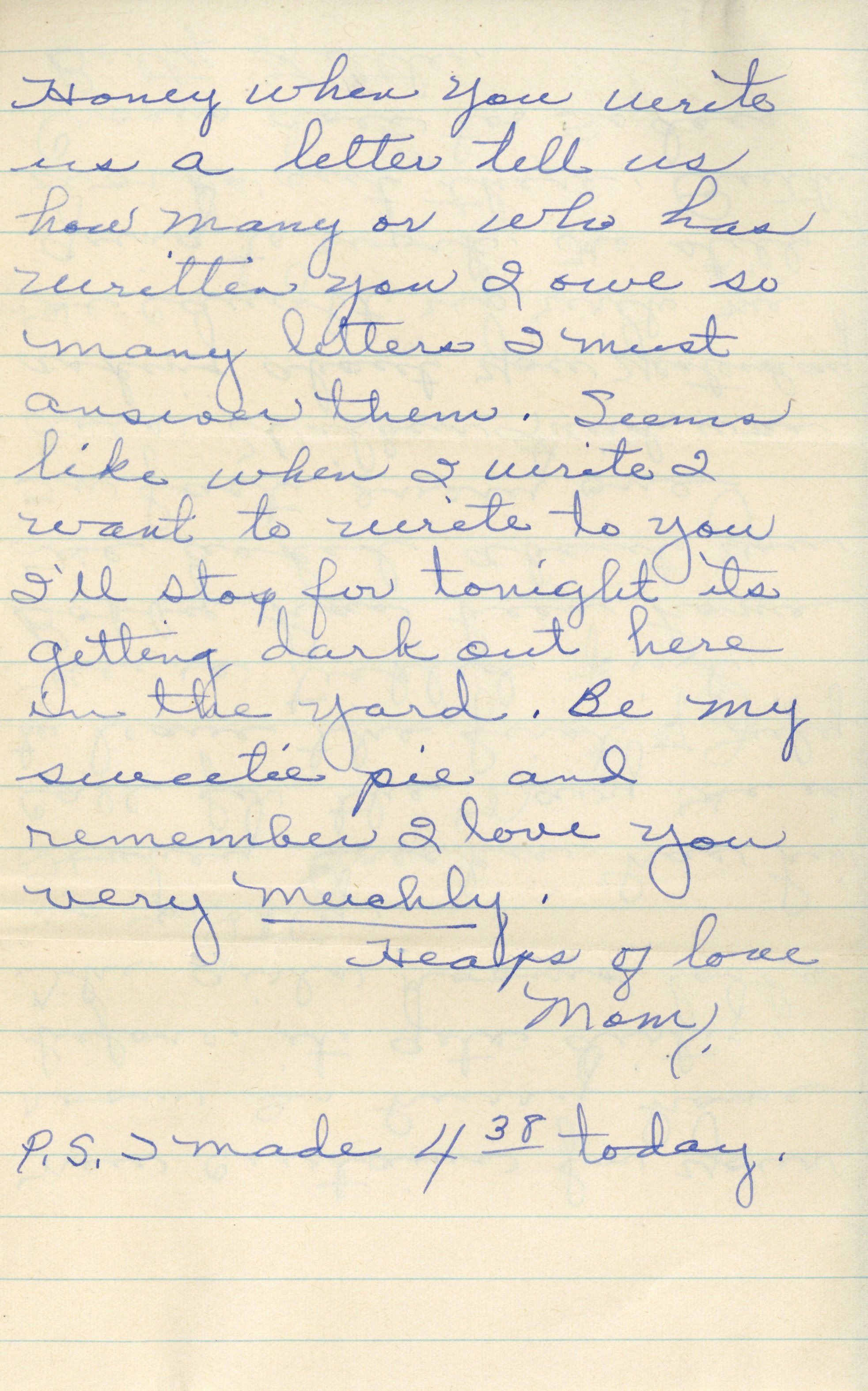 Honey when you write us a letter tell us how many or who has written letters I must answer them. Seems like when I write I want to write to you I’ll stop for tonight its getting dark out here in the yard. Be my sweetie pie and remember 2 love you very muchly.