In the first letter of this series we also learn that Forbey's father worked in a lumber yard and that his younger sister Anna Lou played the piano. 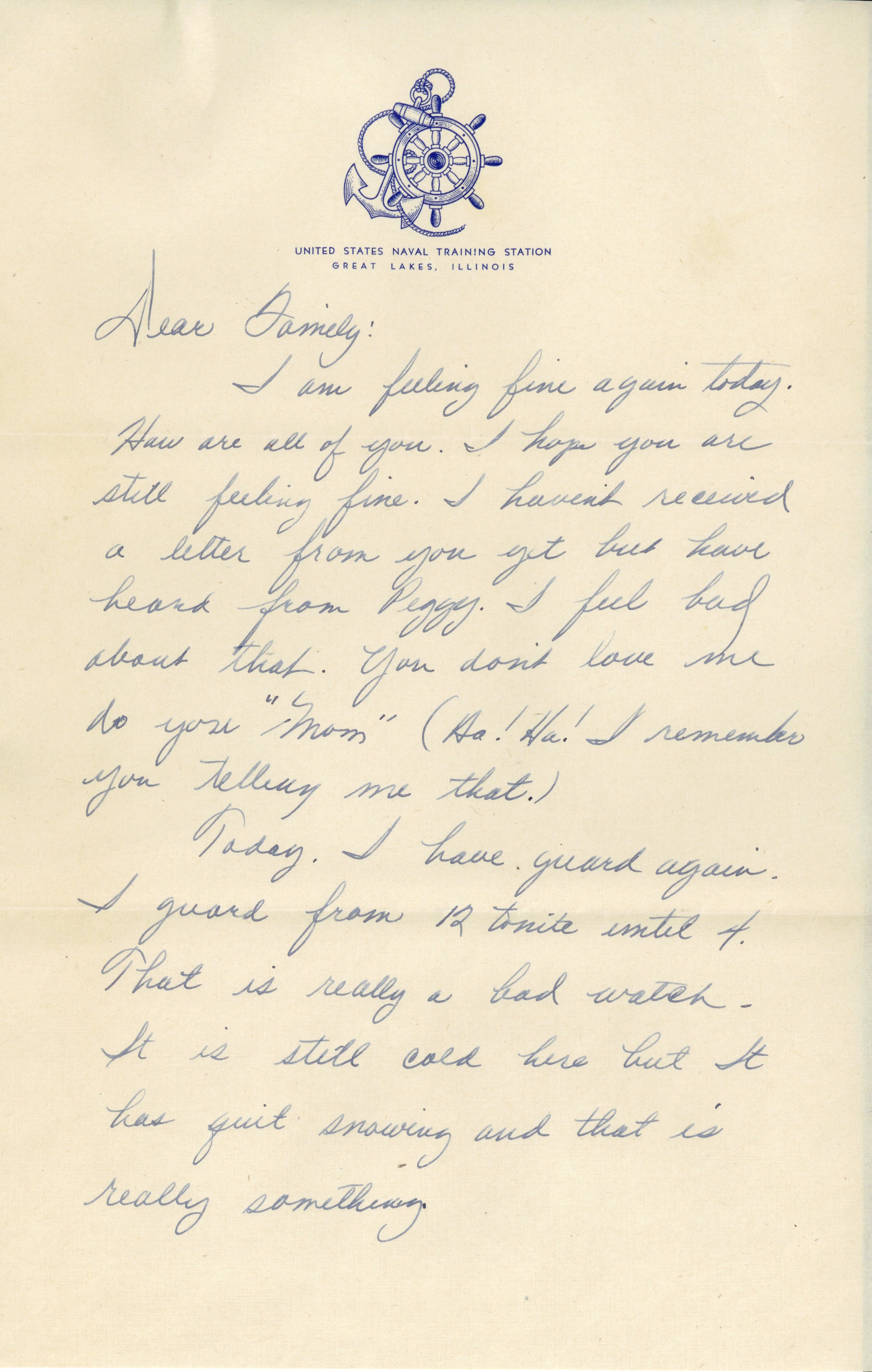 I am feeling fine again today. How are all of you. I hope you are still feeling fine. I haven’t received a letter from you yet but have heard from Peggy. I feel bad about that. You don’t love me do you “Mom” (Ha! Ha! I remember you telling me that.)

Today I have guard again. I guard from 12 tonite until 4. That is really a bad watch. It is still cold here but it has quit snowing and that is really something. 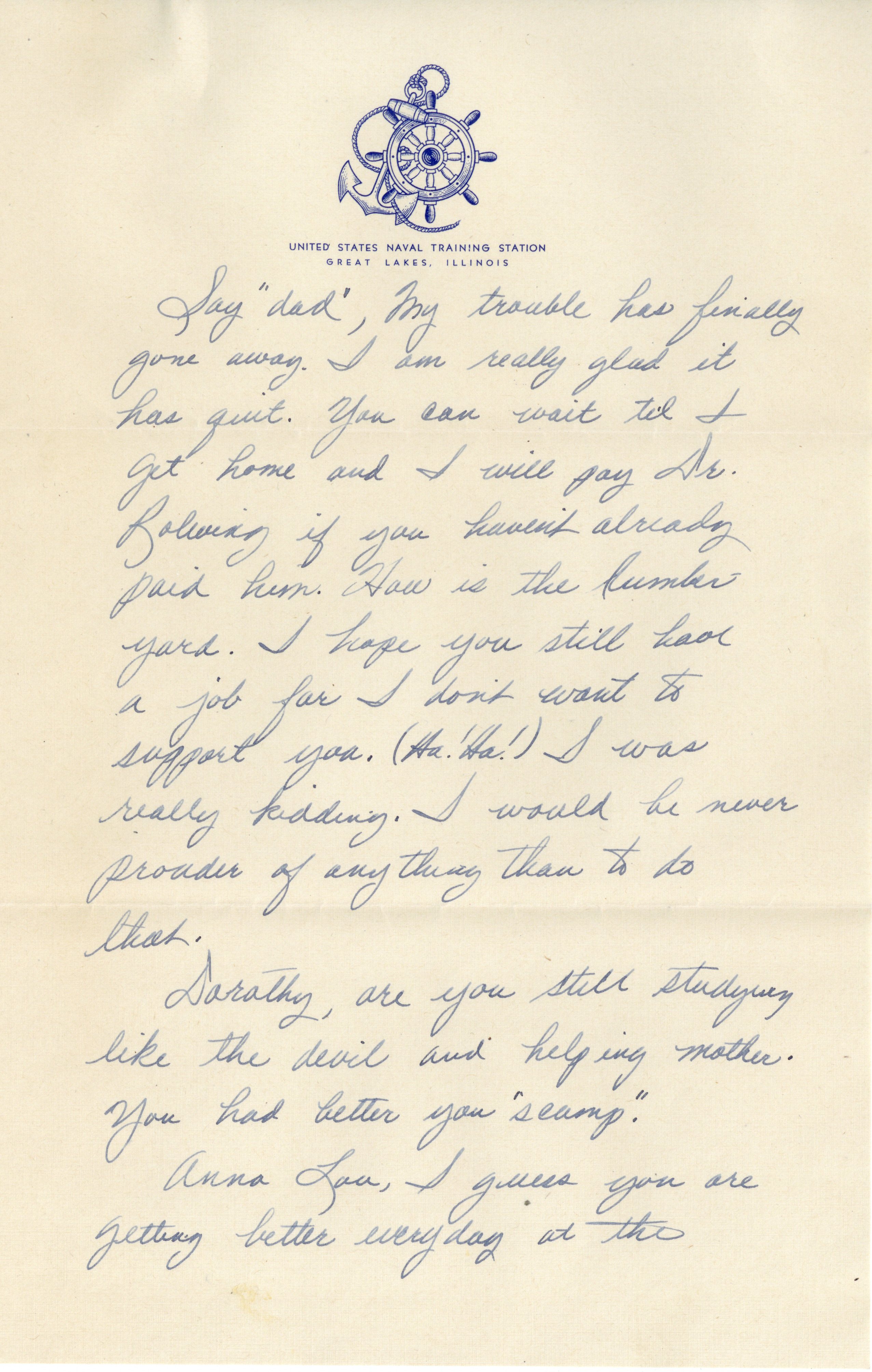 Say “dad”, my trouble has finally gone away. I am really glad it has quit. You can wait till I get home and I will pay Dr. Bolwing if you haven’t already paid him. How is the lumber yard. I hope you still have a job for I don’t want to support you. (Ha! Ha!) I was really kidding. I would be never prouder of anything than to do that.

Dorothy, are you still studying like the devil and helping mother. You had better you “scamp”.

Anna Lou, I guess you are getting better everyday at the 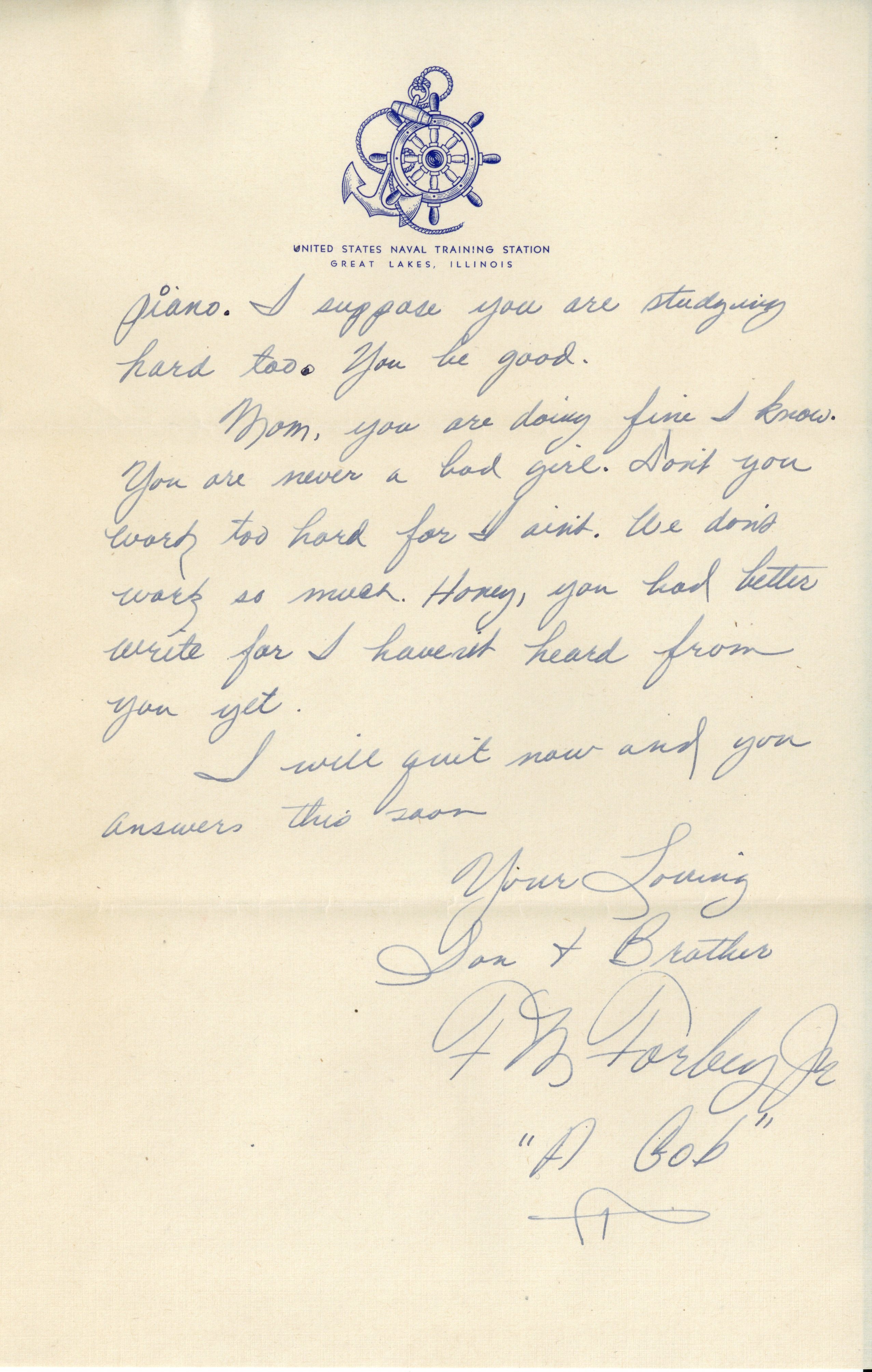 piano. I suppose you are studying hard too. You be good.

Mom, you are doing fine I know. You are never a bad girl. Don’t you work too hard for I ain’t. We don’t work so much. Honey, you had better write for I haven’t heard from you yet.

I will quit now and you answer this soon. 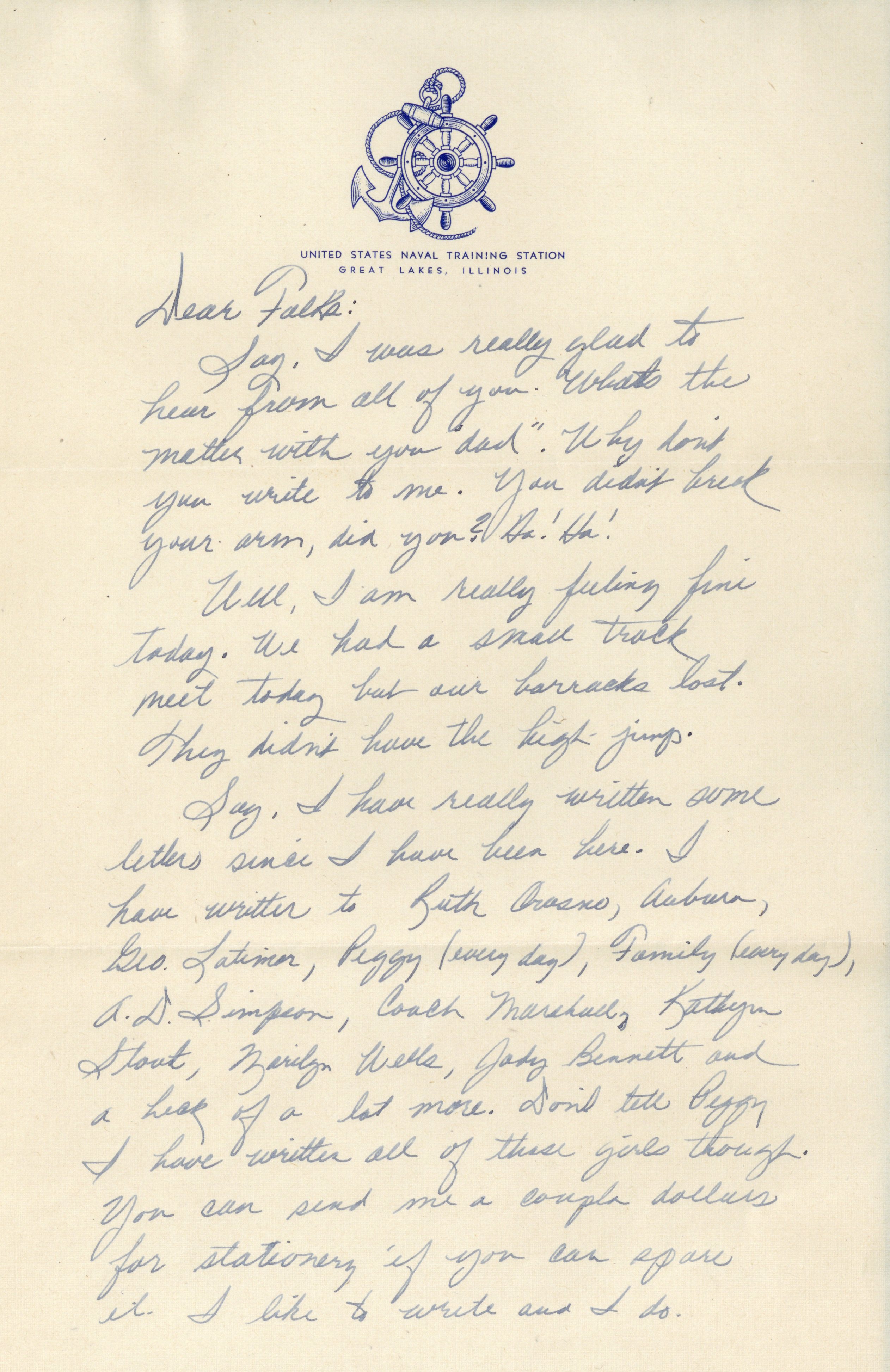 Forbey often wrote to many people while he was in the Navy. He would write to his family daily as well as his girlfriend, Peggy. 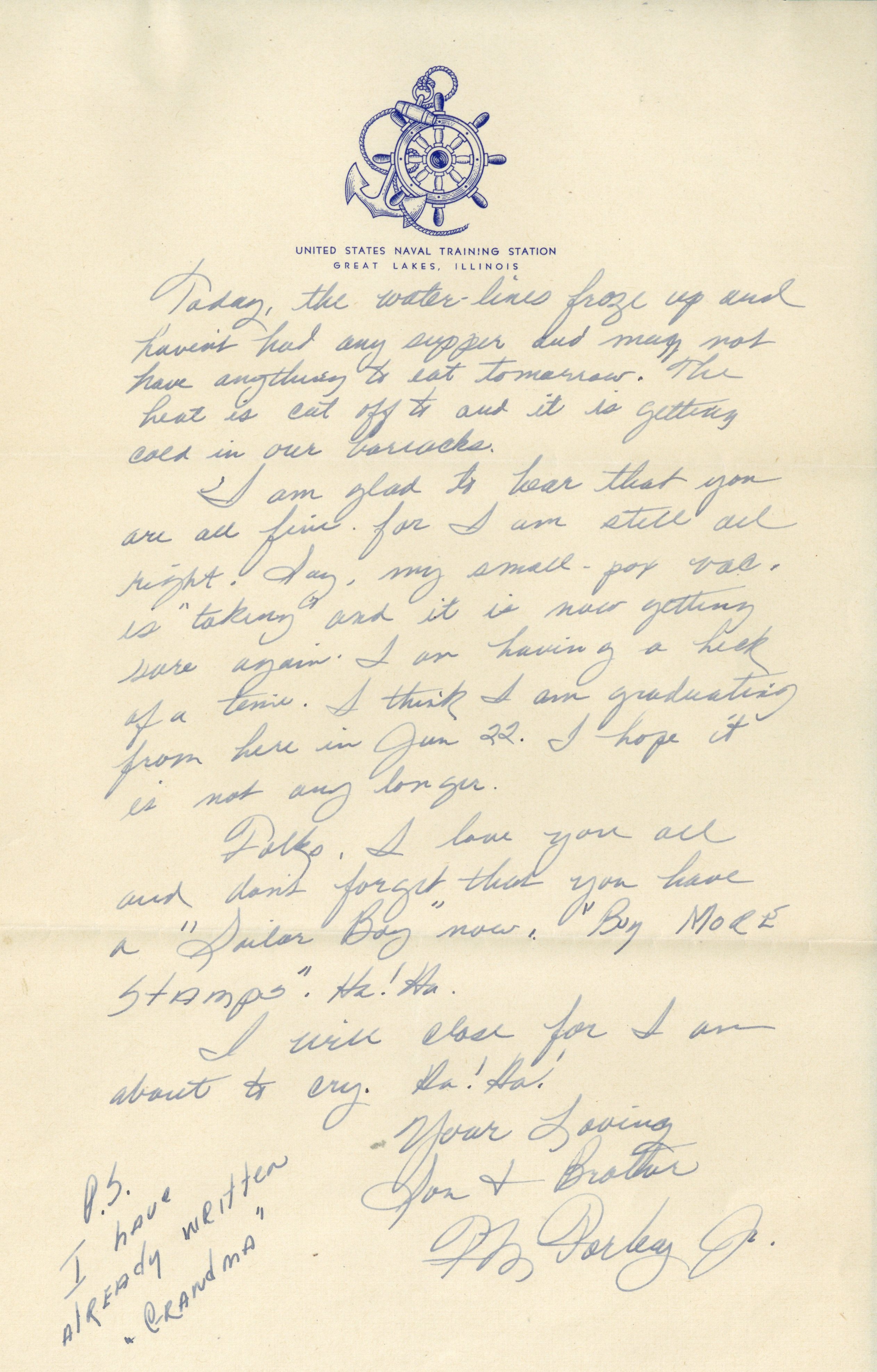 We can learn a lot from this letter Forbey sent to his family. Here we see again how he teased his mom for not writing as many letters as Peggy. Forbey talked about how he received a typhoid shot and was ordered to rest. Forbey again teased his mom about only getting 6 letters when he had received 8 from Peggy. We also learn a little bit about the kinds of meals that were available at Camp Green Bay. 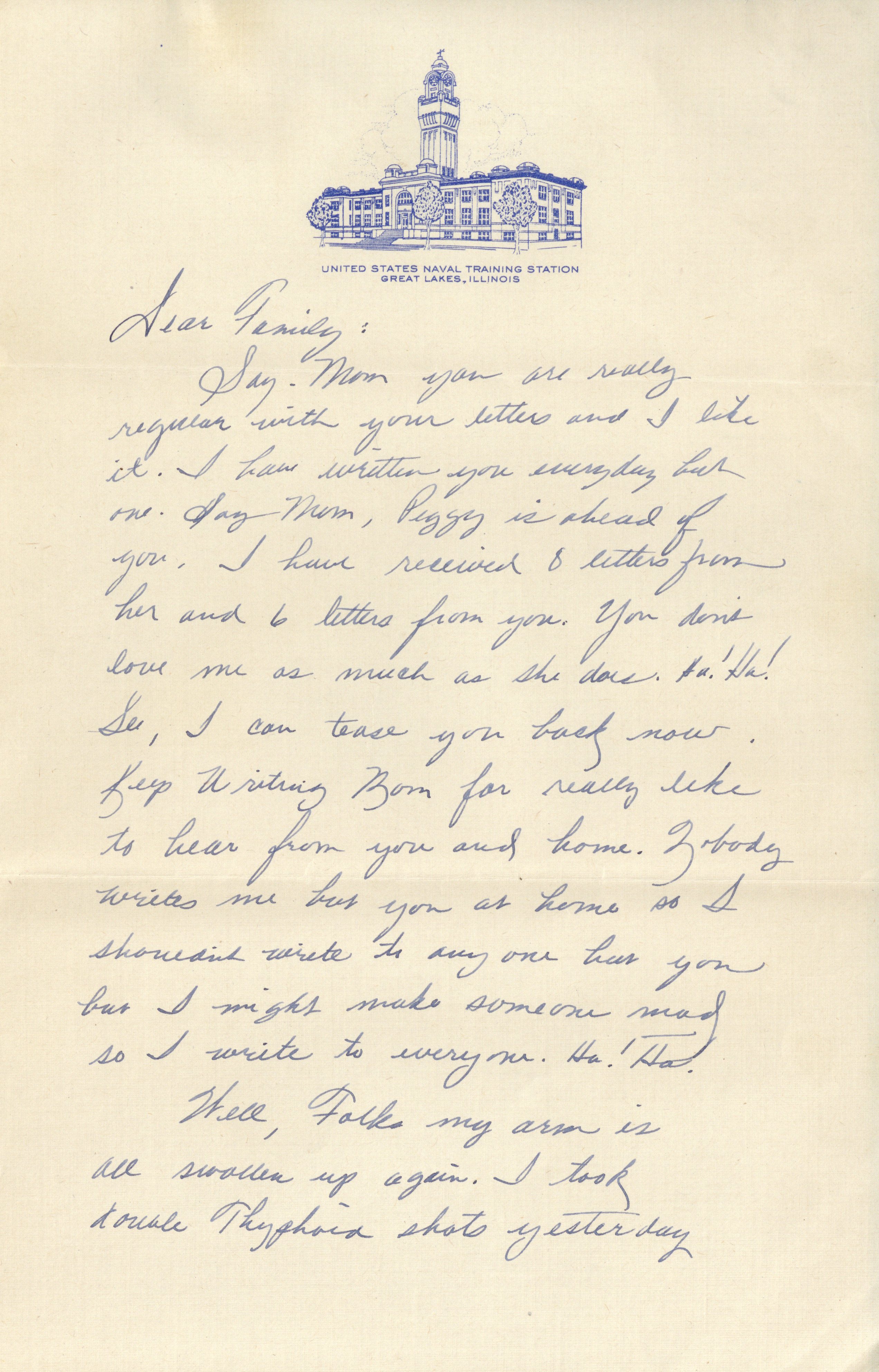 Transcript of the letter:

Say Mom you are really regular with your letters and I like it. I have written you everyday but one. Say Mom, Peggy is ahead of you. I have received 8 letters from her and 6 letters from you. You don’t love me as much as she does. Ha! Ha! See, I can tease you back now. Keep Writing Mom for really like to hear from you and home. Everybody writes me but you at home so I shouldn’t write to everyone but you but I might make someone mad so I write to everyone. Ha! Ha!

Well, Folks my arm is all swollen up again. I took double Thyphoid shots yesterday. 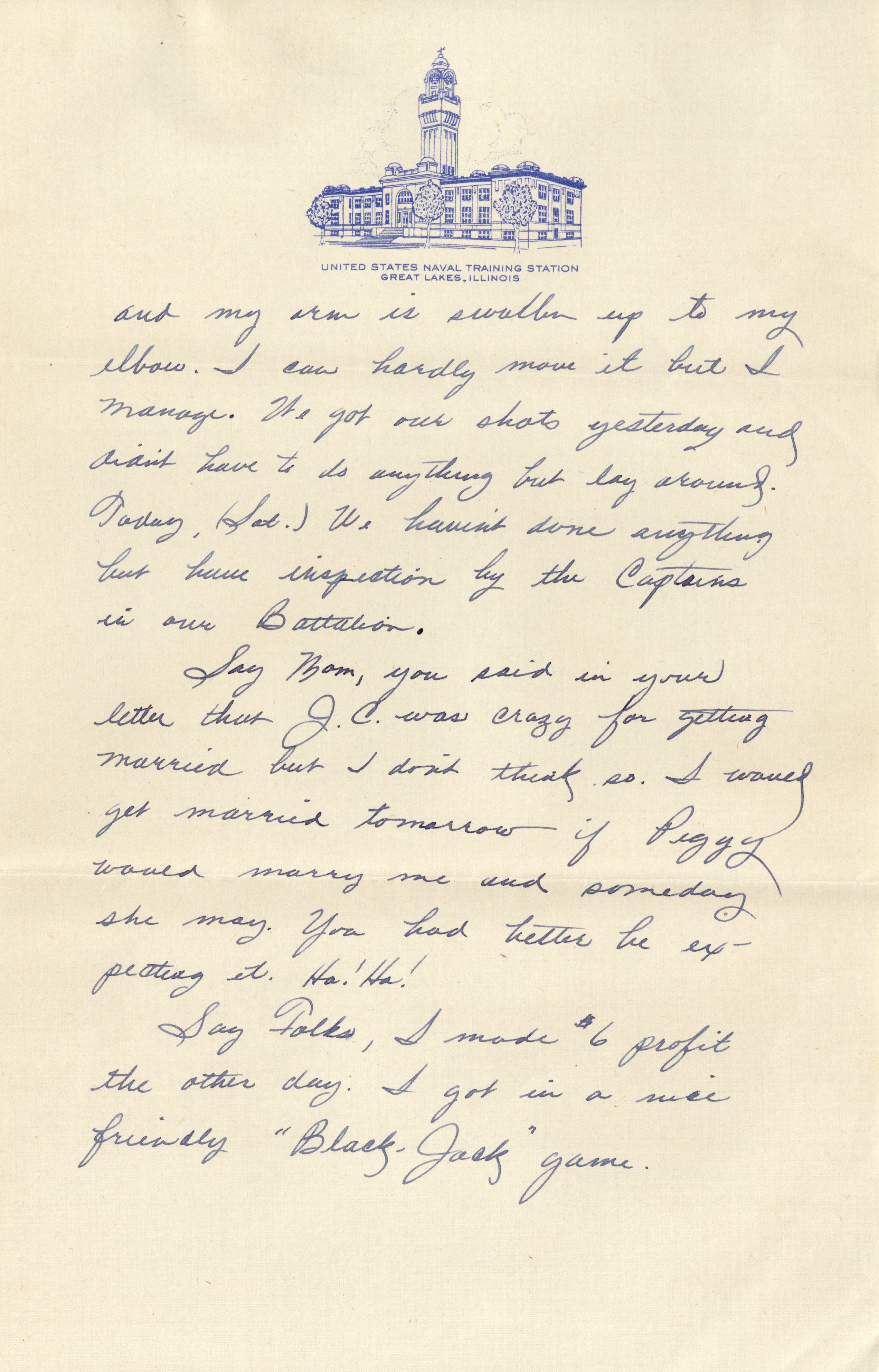 and my arm is swollen up to my elbow. I can hardly move it but I manage. We got our shots yesterday and don’t have to do anything but lay around. Today, (Sat.) We haven’t done anything but have inspection by the Captains in our Battalion.

Say Mom, you said in your letter that J.C. was crazy for getting married but I don’t think so. I would get married tomorrow if Peggy would marry me and someday she may. You had better be expecting it. Ha! Ha!

Say Folks, I made $6 profit the other day. I got in a nice friendly “Black – Jack” game. 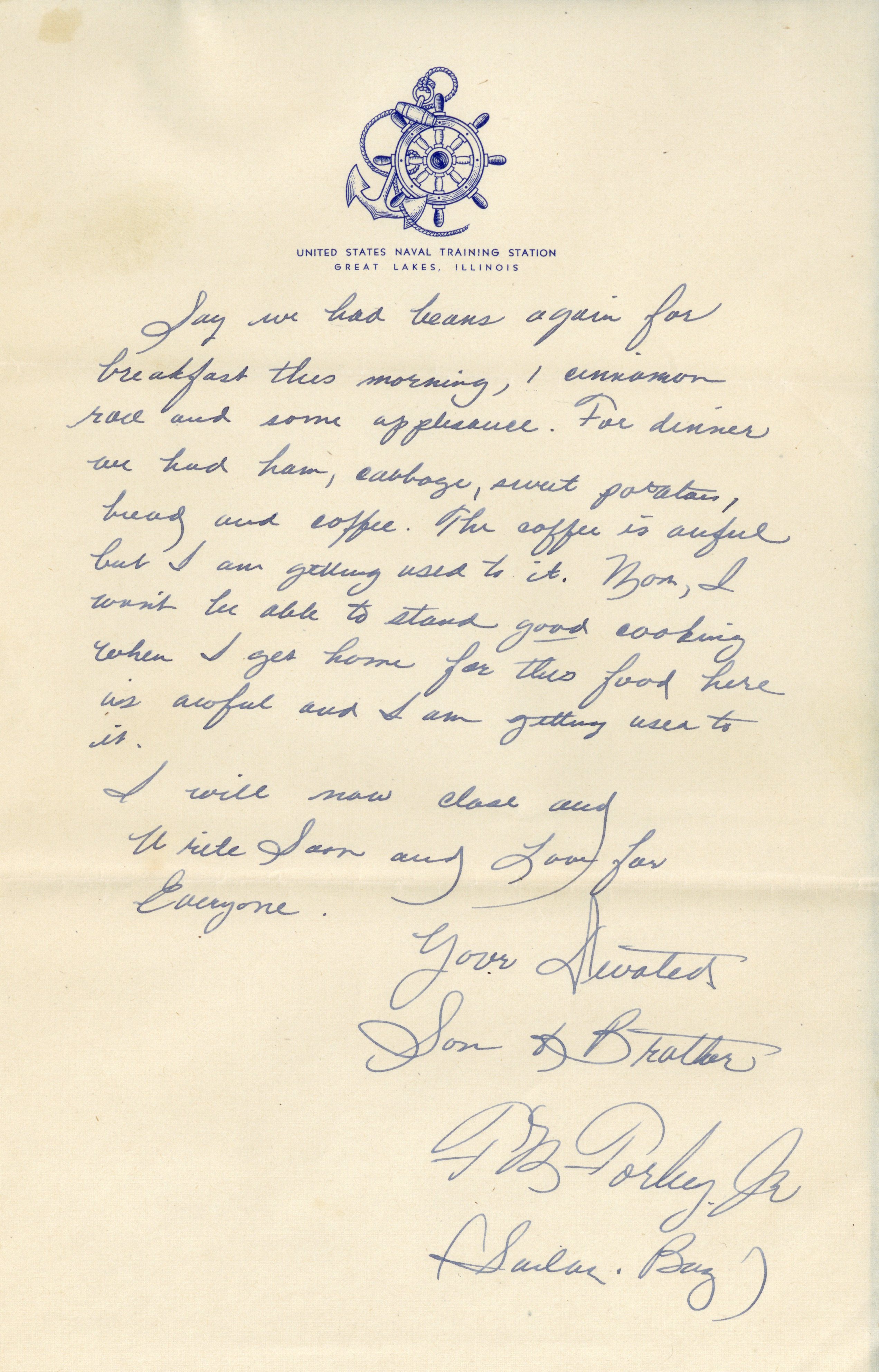 I will now close and Write Soon and Love for Everyone.

Forbey mentioned seeing the show “Who Done It” as well as “Iceland”, which gives insight into some entertainment available to those in the Navy at the time. 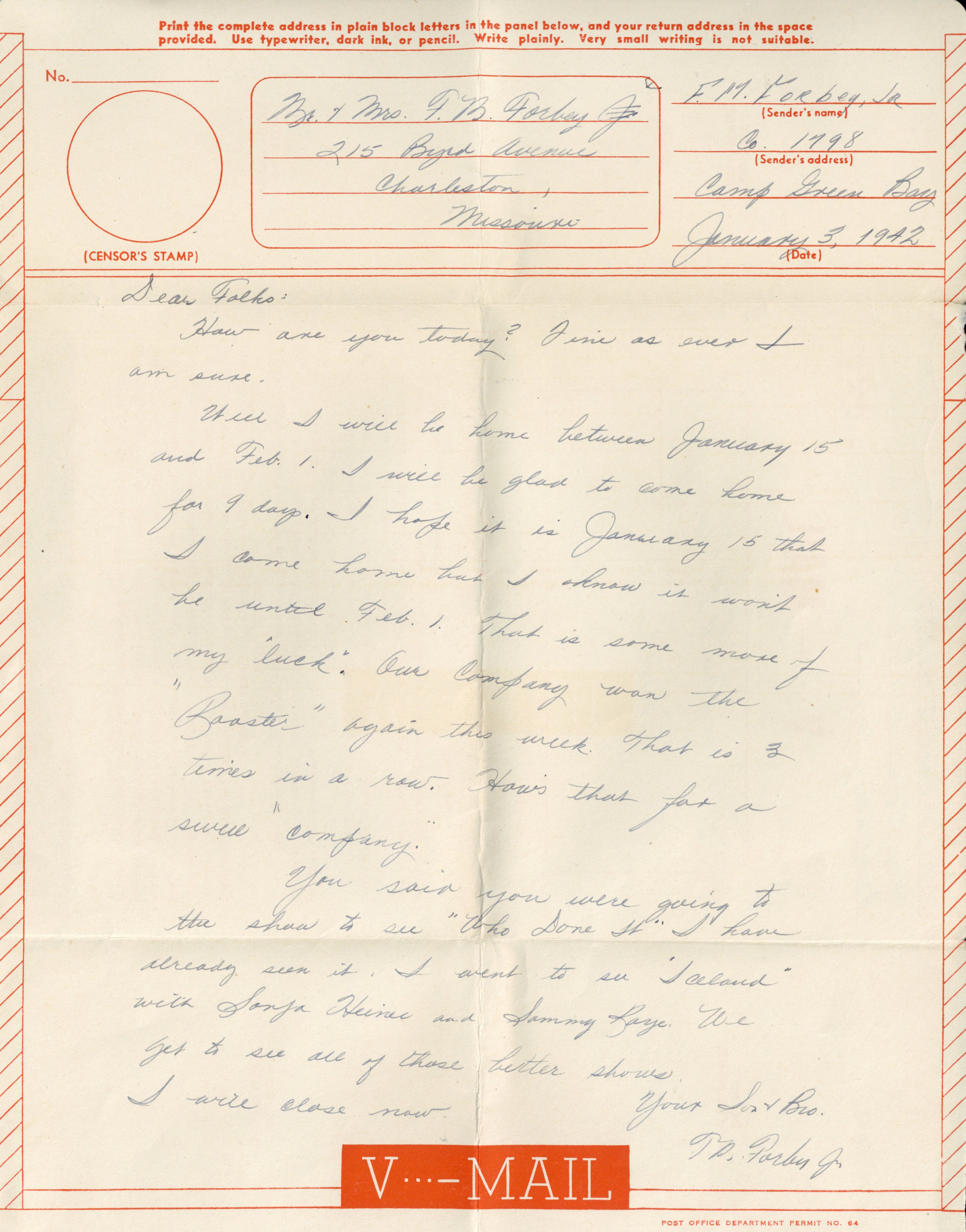 How are you today? Fine as ever I am sure.

Well I will be home between January 15 and Feb 1. I will be glad to come home for 9 days. I hope it is January 15 that I come home but I know it won’t be until Feb. 1. That is some more of my “luck”. Our Company won the “Boaster” again this week. That is 3 times in a row. How’s that for a swell “company”.

You said you were going to the show to see “Who Done It” I have already seen it. I went to see “Iceland” with Sonya Heinee and Sammy Raye. We got to see all of those better shows. I will close now.

From this letter we can learn a bit of what it was like for Forbey celebrating the New Year while in the Navy. Forbey also mentions that his mother has never failed to write to him and he explains how much the letters mean to him. Forbey also mentions he got to see “Who Done It” which was a film released in 1942. He mentions in other letters getting to see some other “pictures”. 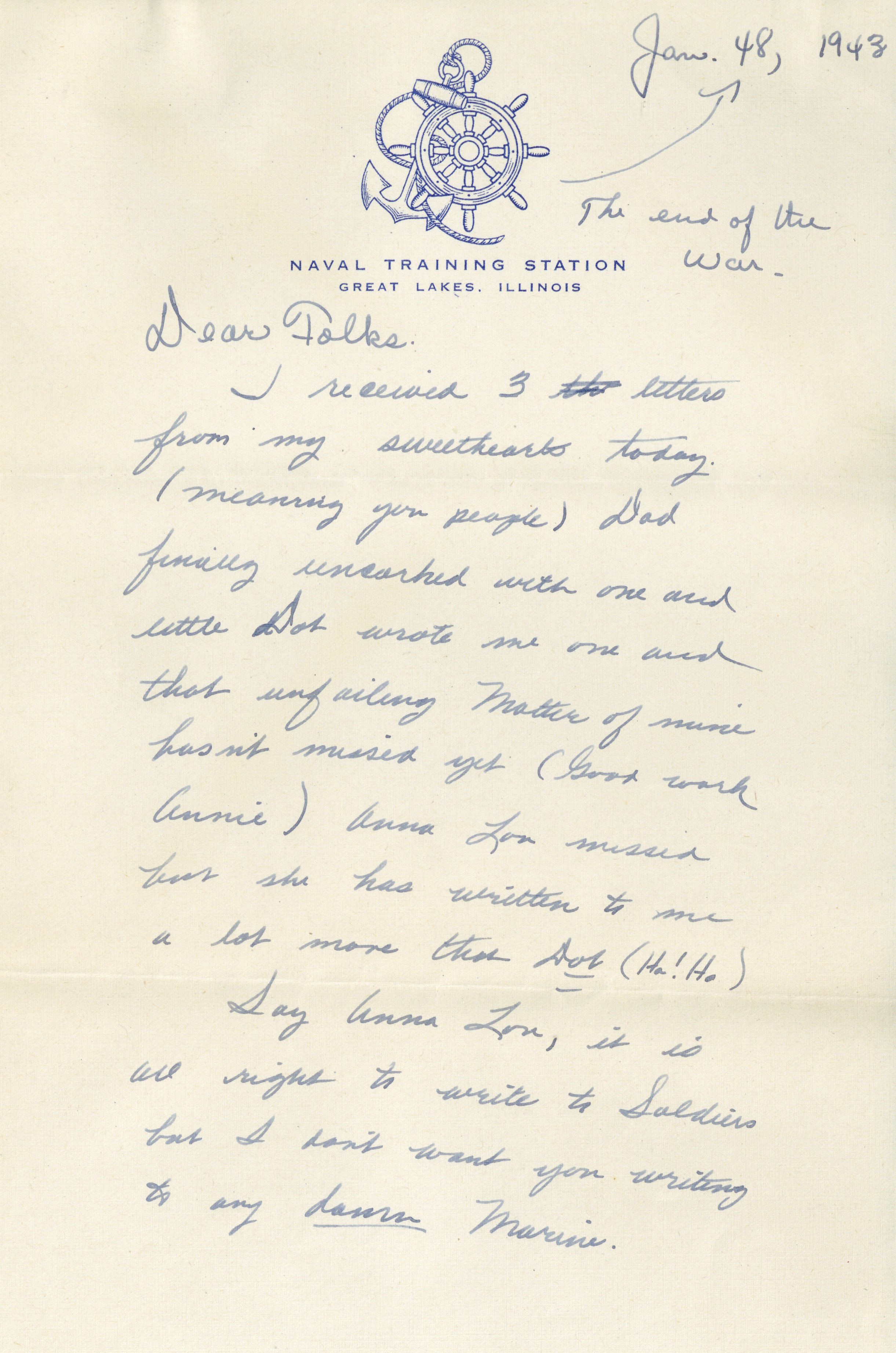 I received 3 the letters from my sweethearts today. (meaning you people) Dad finally unmarked with one and little Dot wrote me one and that unfailing Mother of mine hasn’t missed yet (Good work Annie) Anna Lou missed but she has written to me a lot more than Dot (Ha! Ha)

Say Anna Lou, it is all right to write to Soldiers but I don’t want you writing to any damn Marine. 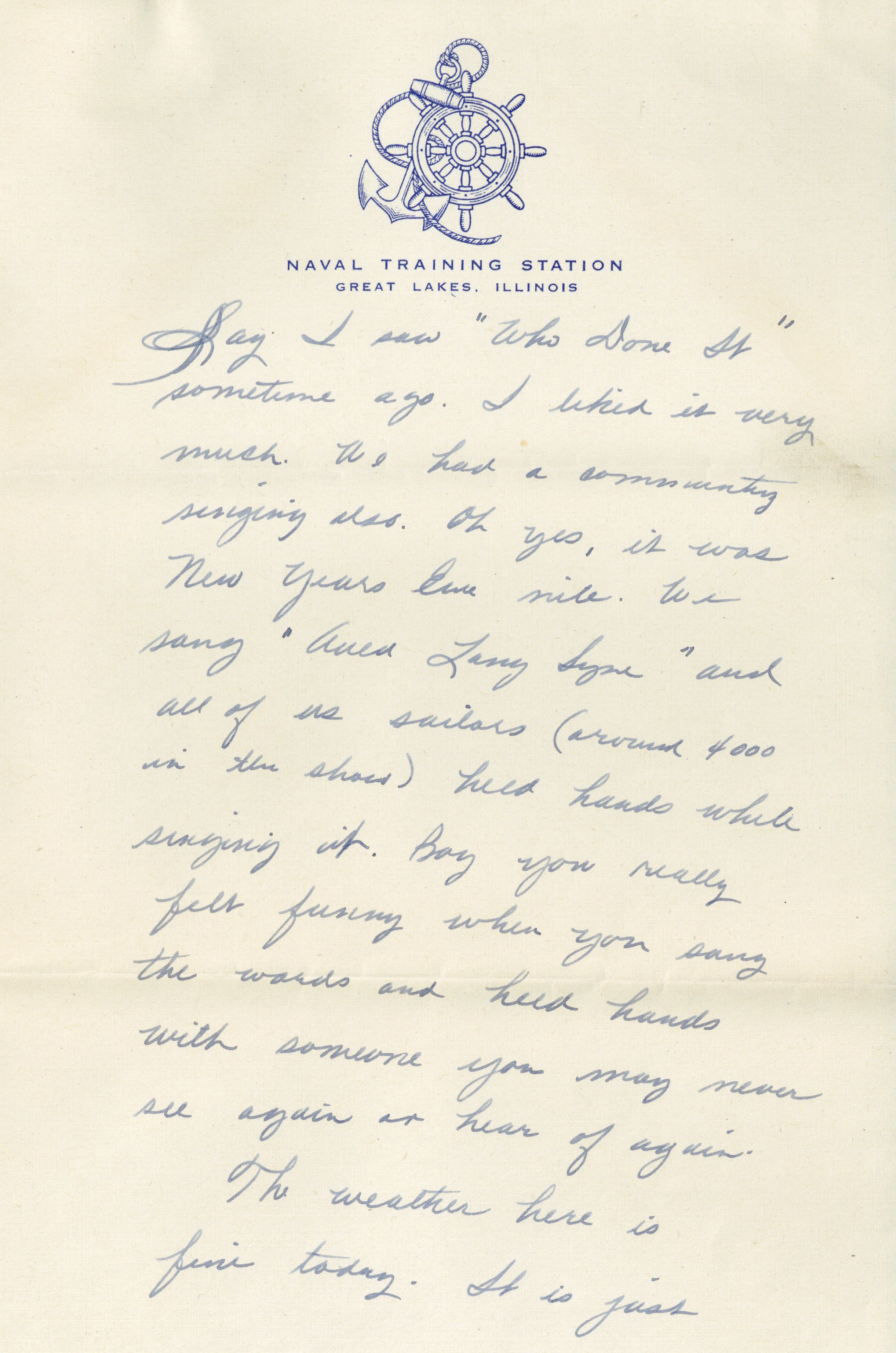 Say I saw “Who Done It” sometime ago. I liked it very much. We had a community singing also. Oh yes, it was New years Eve nite. We sang “Auld Lang Syne” and all of us sailors (around 4000 in the show) held hands while singing it. Boy you really felt funny when you sand the words and held hands with someone you may never see again or hear of again.

The weather here is fine today. It is just 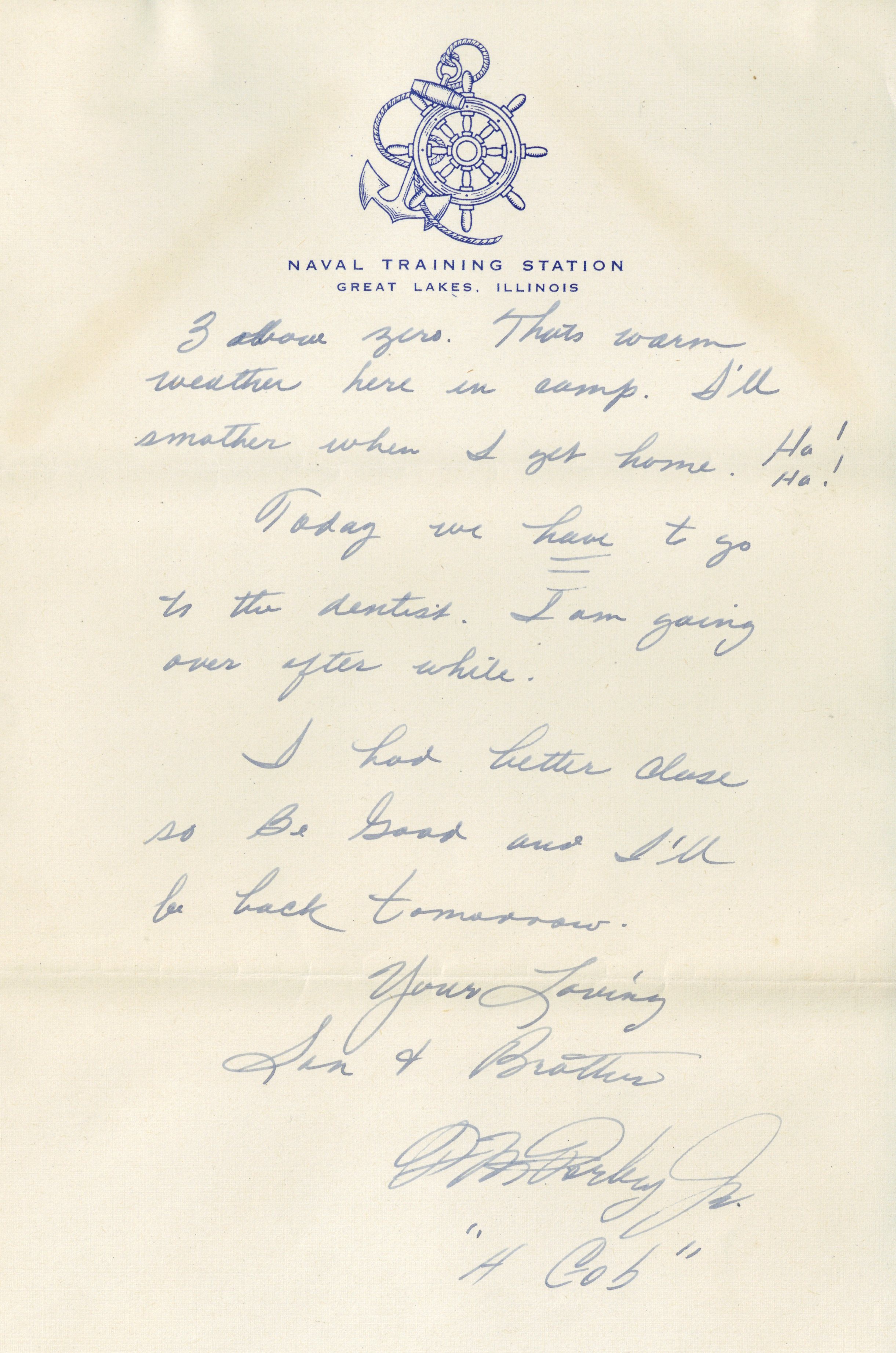 3 above zero. That’s warm weather here in camp. I’ll smother when I get home. Ha! Ha!

Today we have to go to the dentist. I am going over after while.

I had better close so Be Good and I’ll be back tomorrow.

Looking at this letter we can learn that since his time in the Navy that Frank received many letters from friends and family. He also gets his picture taken in the snow for his “company picture”. Forbey also mentioned seeing a “picture” called “George Washington Slept Here”. 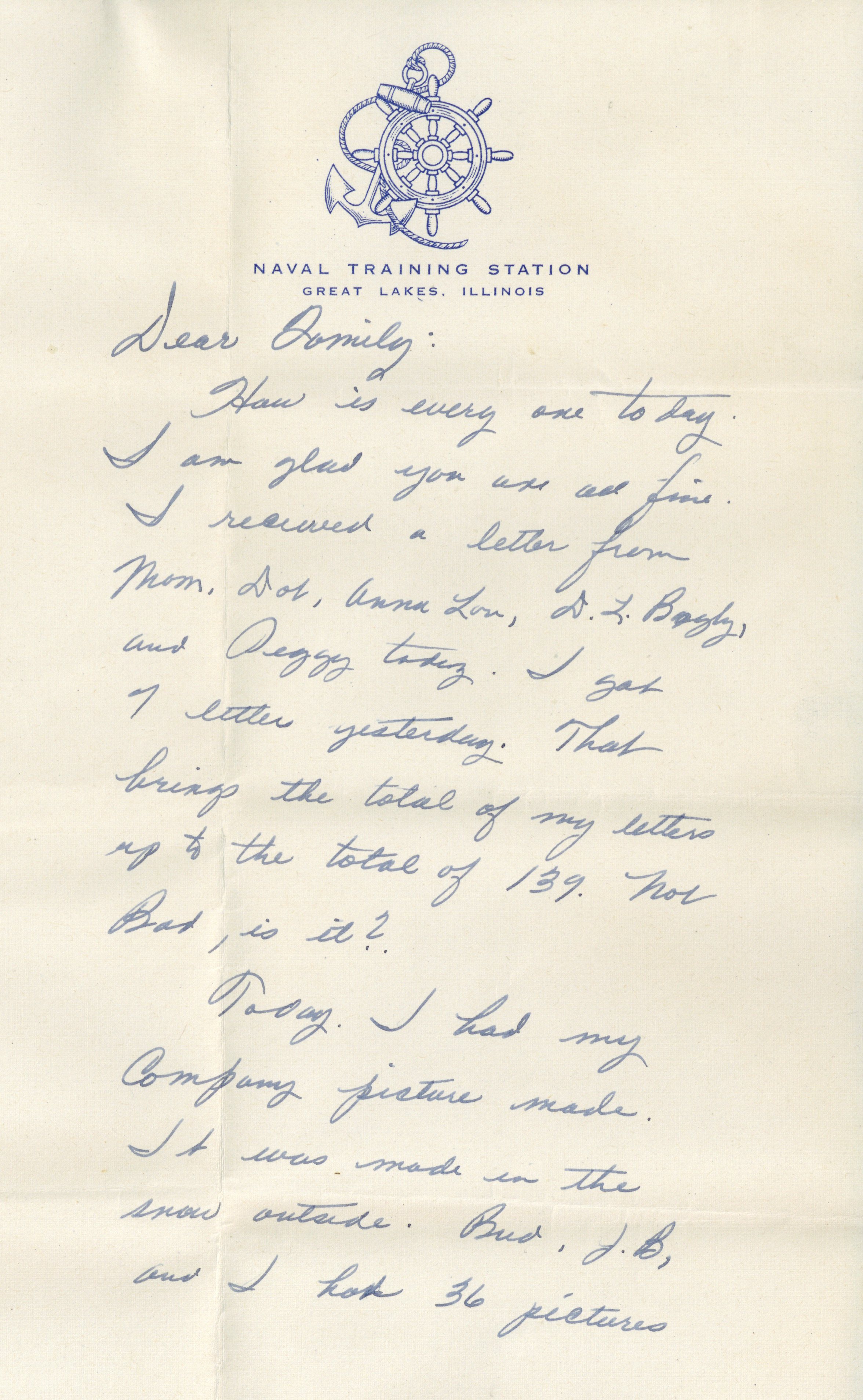 Dear Family: How is every one today. I am glad you are all fine. I received a letter from Mom, Dot, Anna Lou, D.L. Bagly, and Peggy today. I got 7 letters yesterday. That brings the total of my letters up to the total of 139. Not Bad, is it?

Today I had my Company picture made. It was made in the snow outside. Bud, J.B., and I had 36 pictures 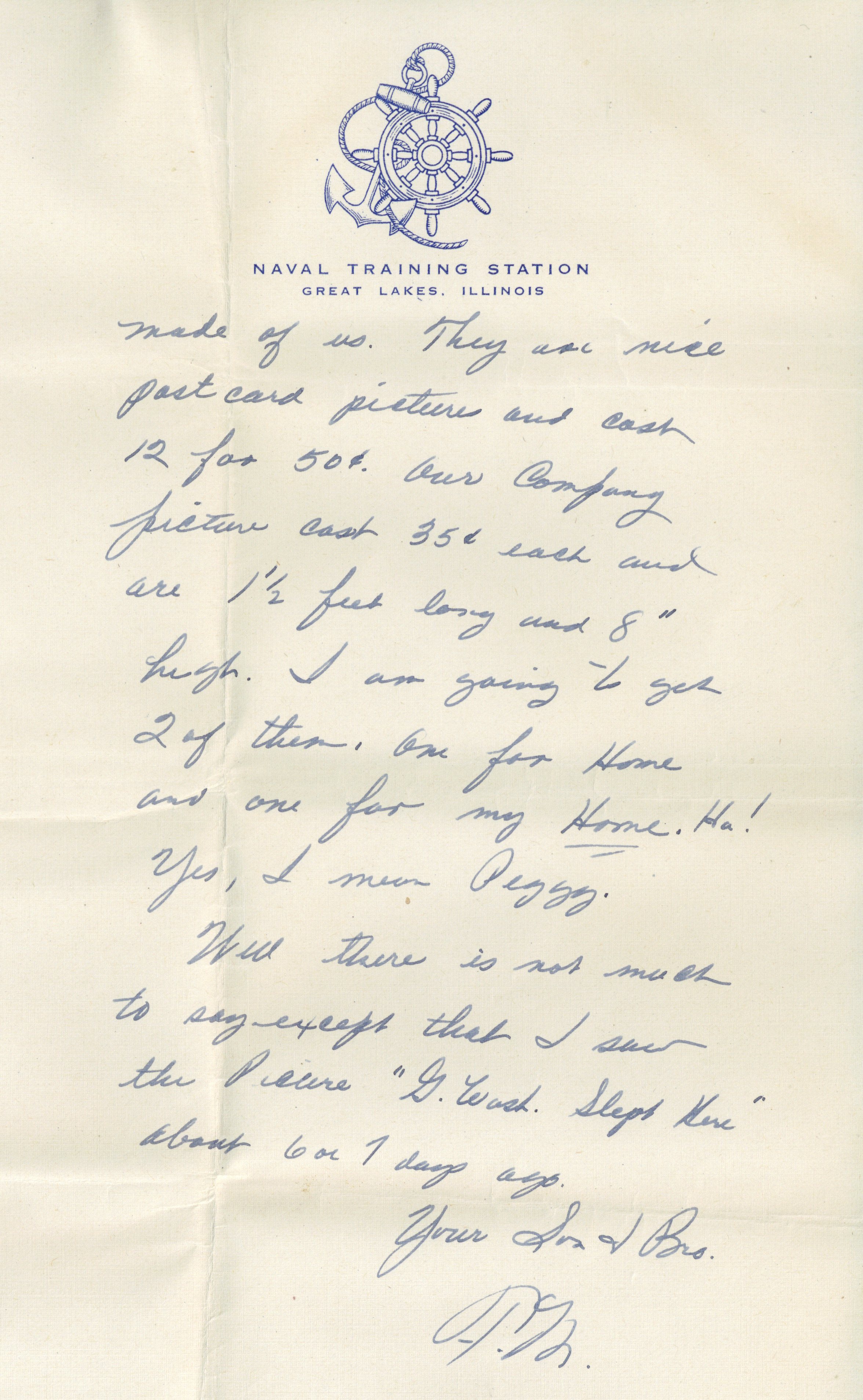 Well there is not much to say except that I saw the Picture “G. Wash. Slept Here” about 6 or 7 days ago.

In this letter we learn Forbey's first graduation was a few months after he has arrived at the Great Lakes. He mentioned, throughout his letters, hating the haircuts in the Navy and in this letter he talks about getting a haircut from Joe Harvey, most likely someone from Forbey's hometown, since he is to visit there in the days after this letter. 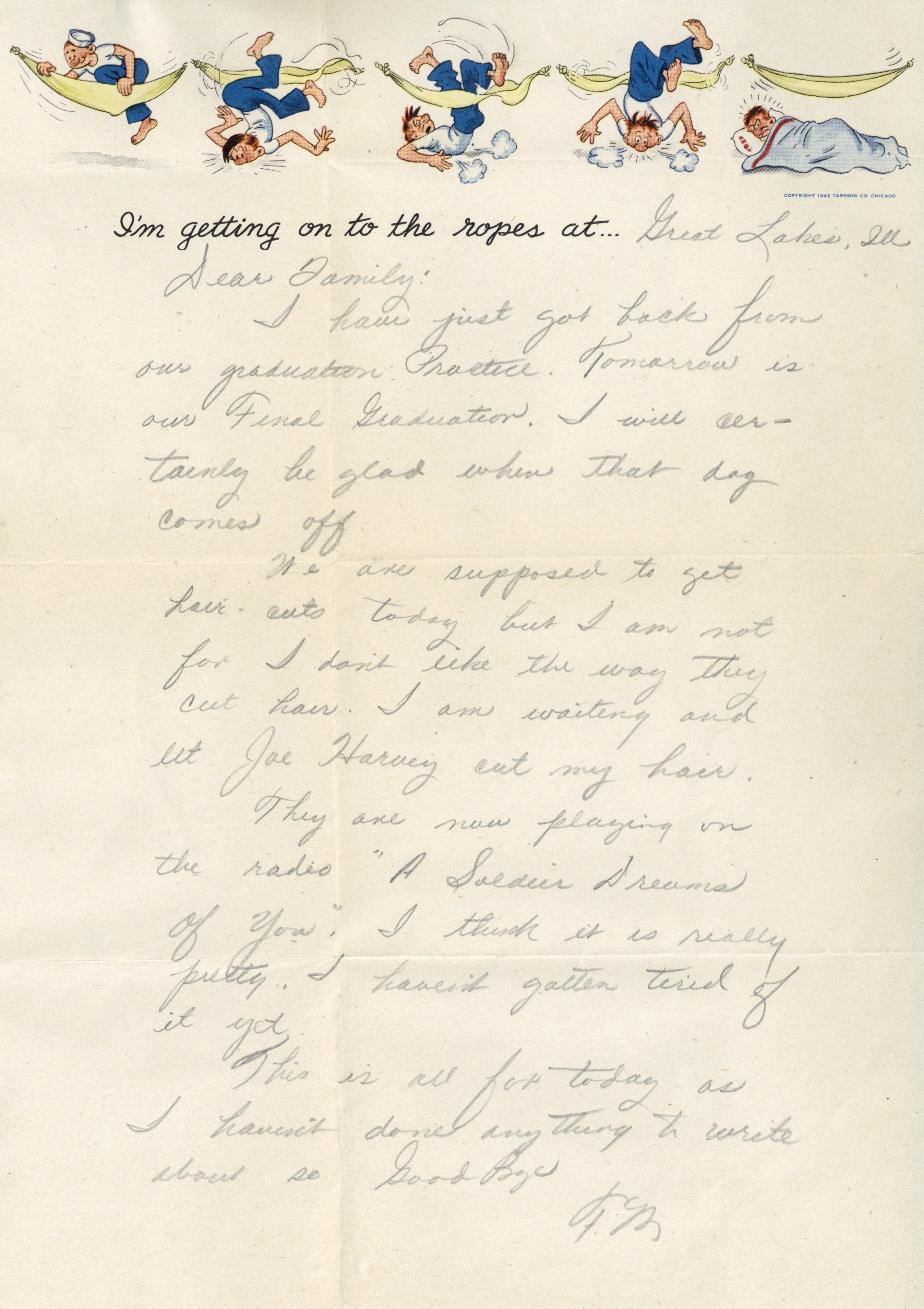 I have just got back from our graduation Practice. Tomorrow is our First Graduation. I will certainly be glad when that dog comes off.

We are supposed to get hair-cuts today but I am not for I don’t like the way they cut hair. I am waiting and let Joe Harvey cut my hair.

They are now playing on the radio “A Soldier Dreams of You,” I think it is really pretty. I haven’t gotten tired of it yet.

This is all for today as I haven’t done anything to write about so GoodBye.