Frank M. Forbey served in the United States Navy during World War 2, from 1942 through 1945. He trained at Camp Green Bay in Illinois. In 1943 he officially became a Sound Operator.

This letter is sent while Forbey is on his way to the Great Lakes with his friends Bud and J.B. A symbol is located in the top left corner of the letter, “USD – United Service Organizations”. In this letter he mentions a French Fleet being destroyed. The envelope to this letter has “No. 1” written on it in blue ink, likely numbered by his family. The envelope also has the same phrase from the bottom of the letter printed on the front, “idle gossip sinks ships”. 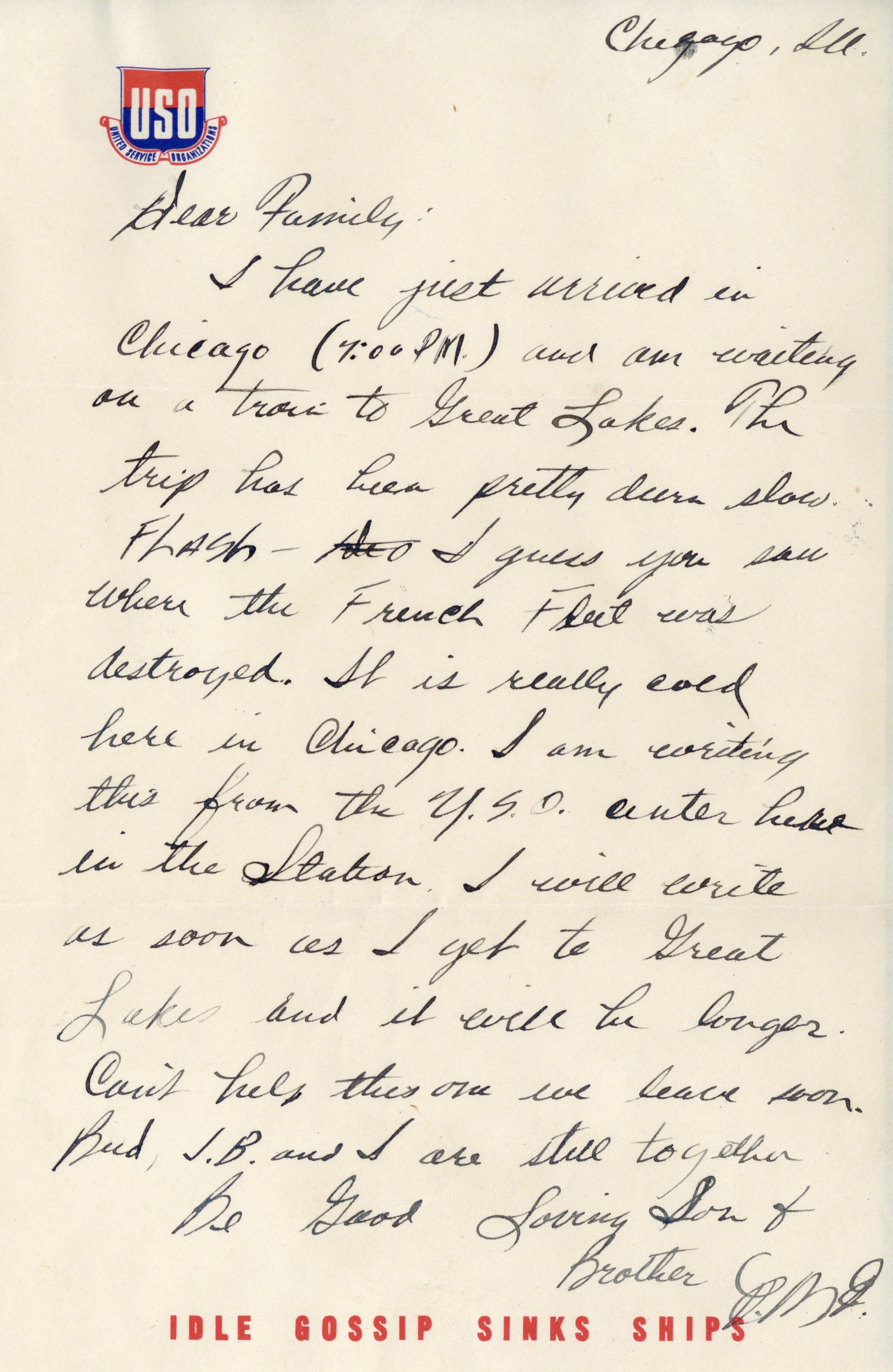 I have just arrived in Chicago (4:00 PM) and am waiting on a train to Great Lakes. The trip has been pretty darn slow. Flash – I guess you saw where the French Fleet was destroyed. It is really cold here in Chicago. I am writing this from the U.S.O. counter here in the Station. I will write as soon as I get to Great Lakes and it will be longer. Can’t help this one we leave soon. Bud, J.B. and I are still together.

The first letter Forbey sends while he is officially considered to be a part of the navy. This letter gives insight into what Frank experience during training in the Great Lakes. He talks about the terms he has already learned that is used in the Navy, how they scrub the decks every night, and how he stands guard some nights. 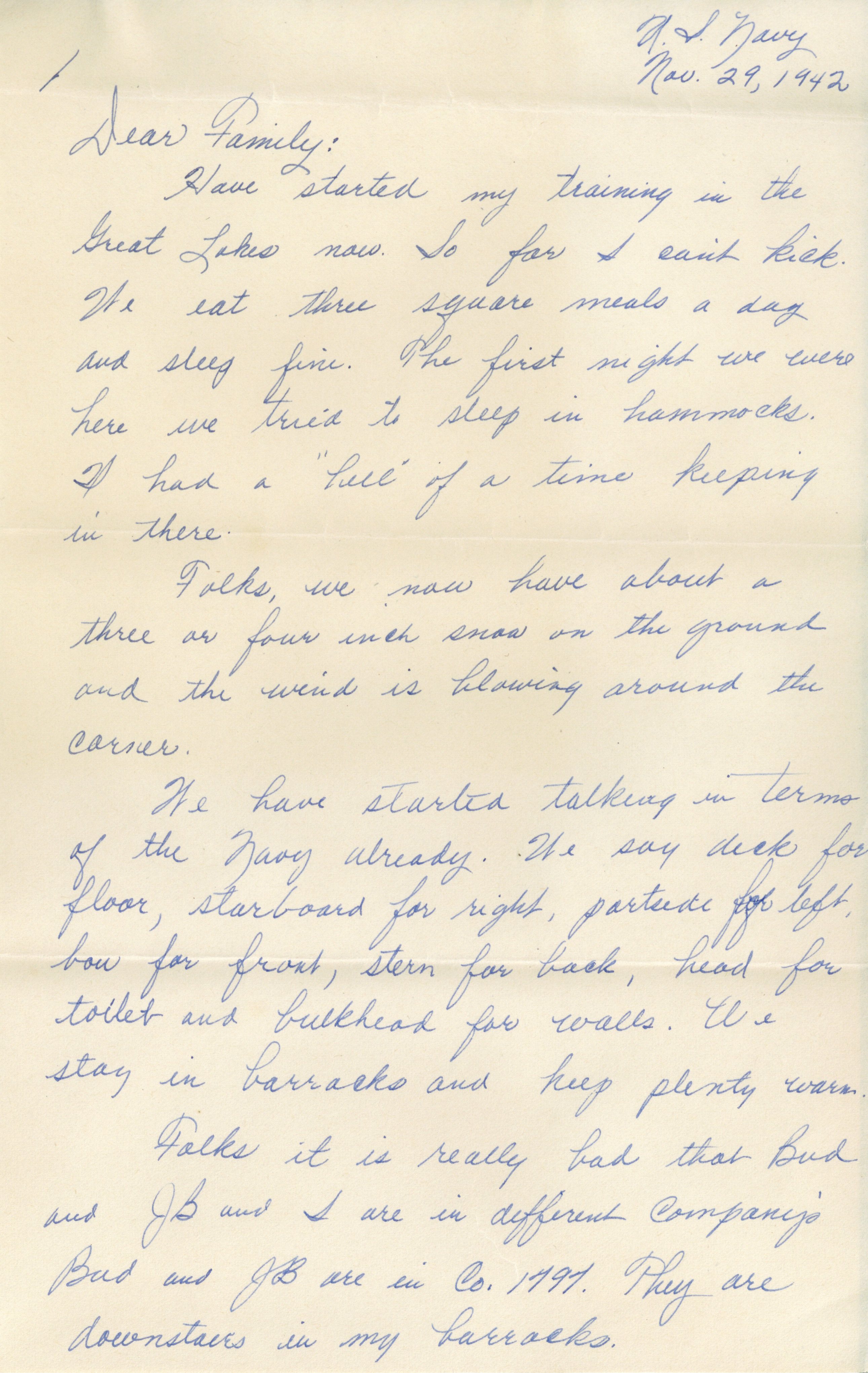 Have started my training in the Great Lakes now. So far I can’t kick. We eat three square meals a day and sleep fine. The first night we were here we tried to sleep in hammocks. I had a “hell” of a time keeping in there.

Folks, we now have about a three or four inch snow on the ground and the wind is blowing around the corner.

We have started talking in terms of the Navy already. We say deck for floor, starboard for right, portside for left, bow for front, stern for back, head for toilet and buckhead for walls. We stay in barracks and keep plenty warm.

Folks it is really bad that Bud and JB and I are in different Company’s Bud and JB are in Co. 1797. They are downstairs in my barracks. 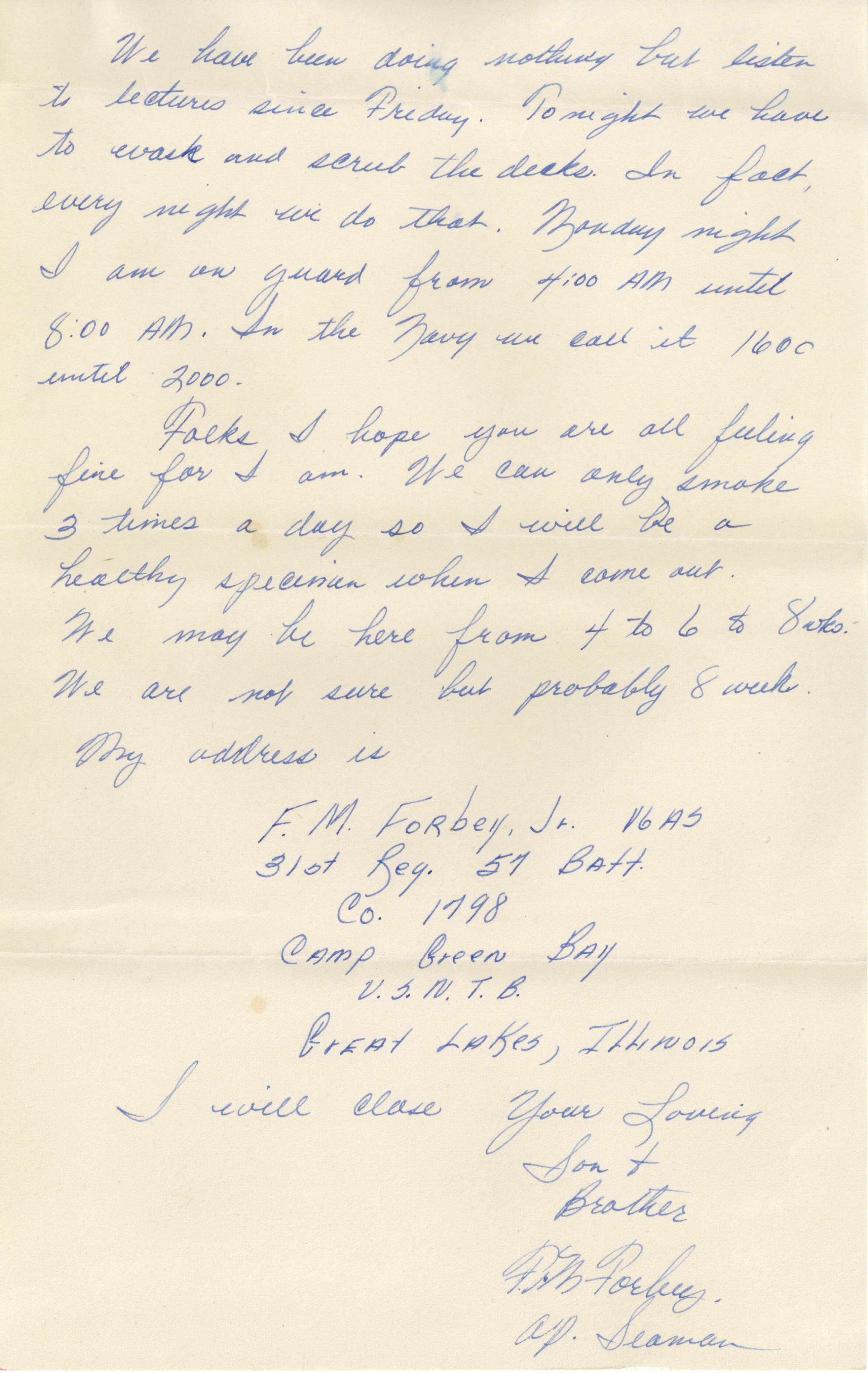 We have been doing nothing but listen to lectures since Friday. Tonight we have to wash and scrub the decks. In fact, every night we do that. Monday night I am on guard from 4:00 AM until 8:00 AM. In the Navy we call it 1600 until 2000.

Folks I hope you are all feeling fine for I am. We can only smoke 3 times a day so I will be a healthy specimen when I come out. We may be here from 4 to 6 & 8 wks. We are not sure but probably 8 week.

I will close Your Loving

Forbey gives more details about what life is like while training in the Navy. Forbey describes what it is like to stand guard, which he mentions he does not enjoy. 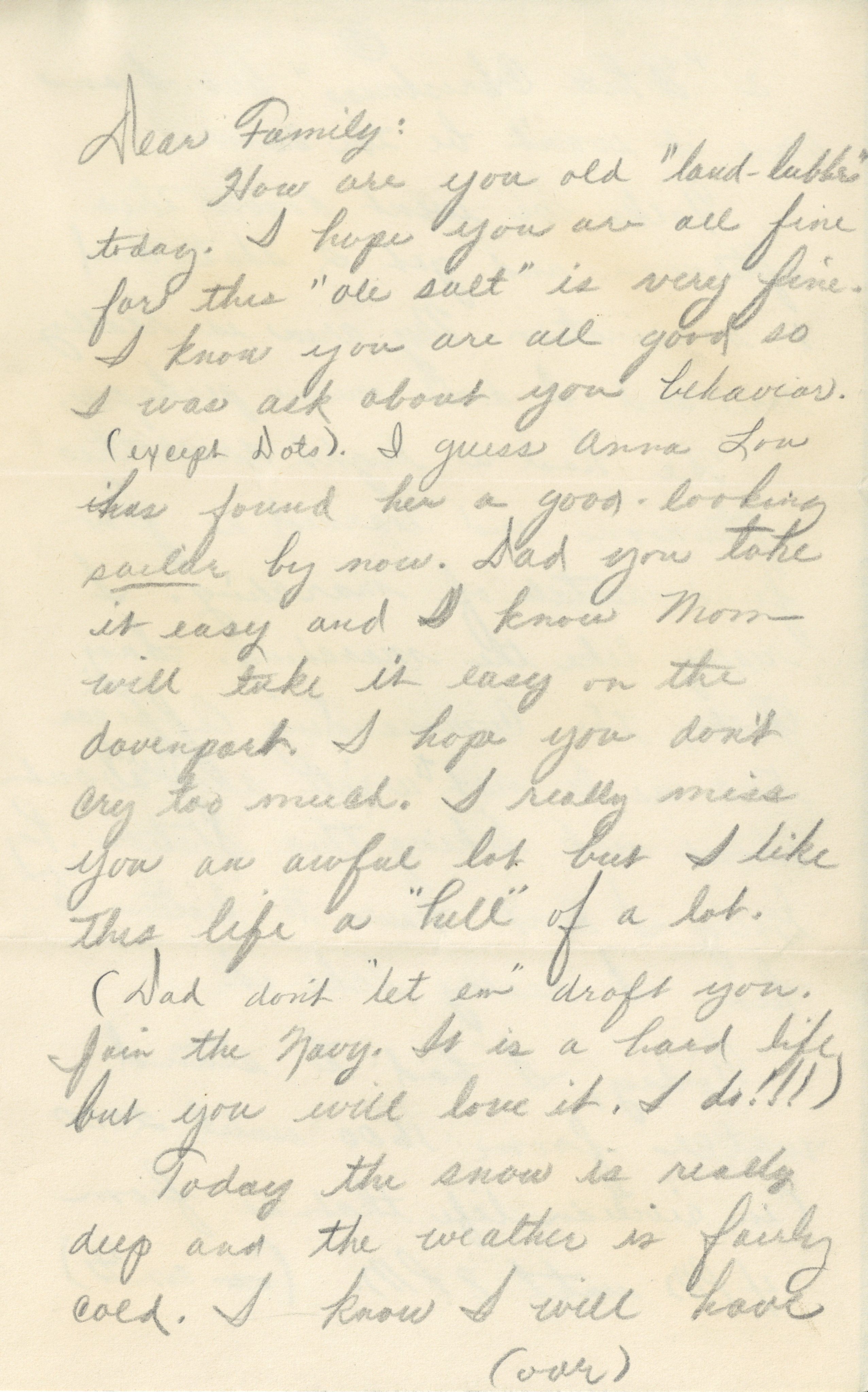 How are you old “land-lubbers” today. I hope you are all fine for this “ole salt” is very fine. I know you are all good so I was ask about you behavior. (except Dots). I guess Anna Lou has found her a good – looking sailor by now. Dad you take it easy and I know Mom – will take it easy on the davenport. I hope you don’t cry too much. I really miss you an awful lot but I like the life a “hell” of a lot. (Dad don’t “let em” draft you. Join the Navy. It is a hard life but you will love it. I do!!!)

Today the snow is really deep and the weather is fairly cold. I know I will have 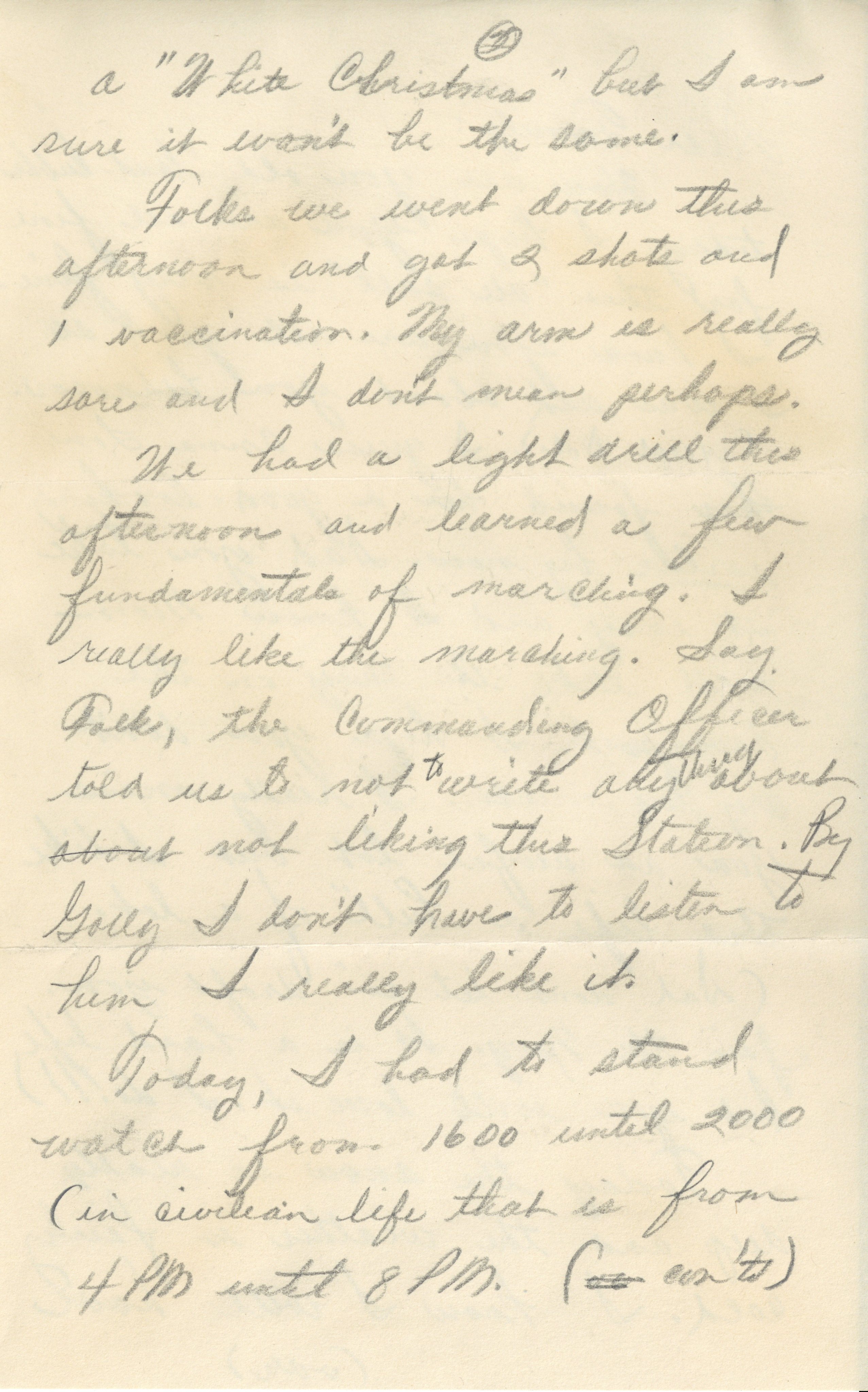 A “White Christmas” but I am sure it won’t be the same.

Folks we went down this afternoon and got 2 shots and 1 vaccination. My arm is really sore and I don’t mean perhaps.

We had a light drill this afternoon and learned a four fundamentals of marching. I really like the marching. Say Folk, the Commanding Officer told us to not to write anything about about not liking the Station. By Golly I don’t have to listen to him I really like it. 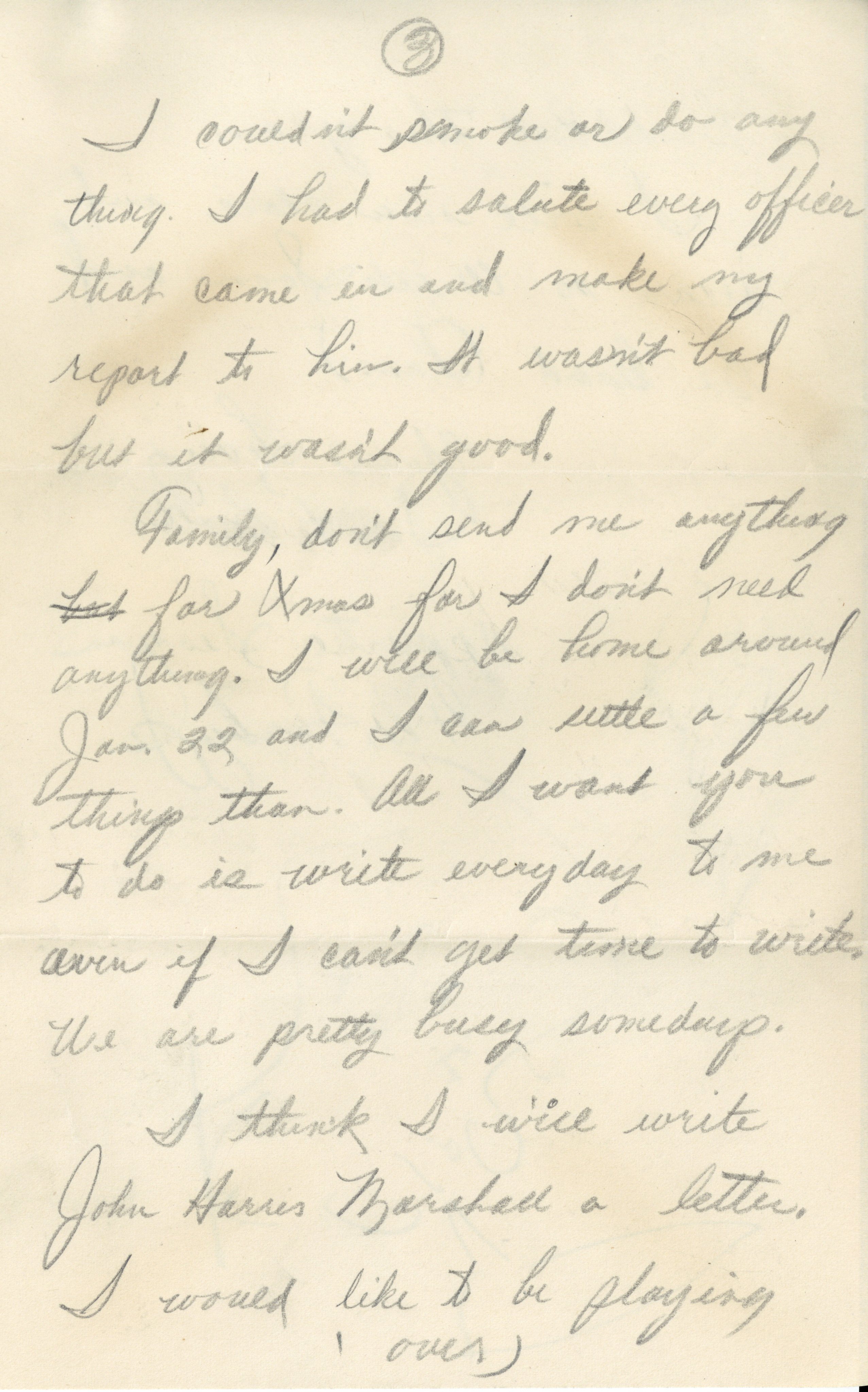 I couldn’t smoke or do anything. I had to salute every officer that came in and make my report to him. It wasn’t bad but it wasn’t good.

Family, don’t send me anything but for Xmas for I don’t need anything. I will be home around Jan. 22 and I can settle a few things then. All I want you to do is write everyday to me even if I can’t get time to write. We are pretty busy somedays.

I think I will write John Harris Marshall a letter. I would like to be playing 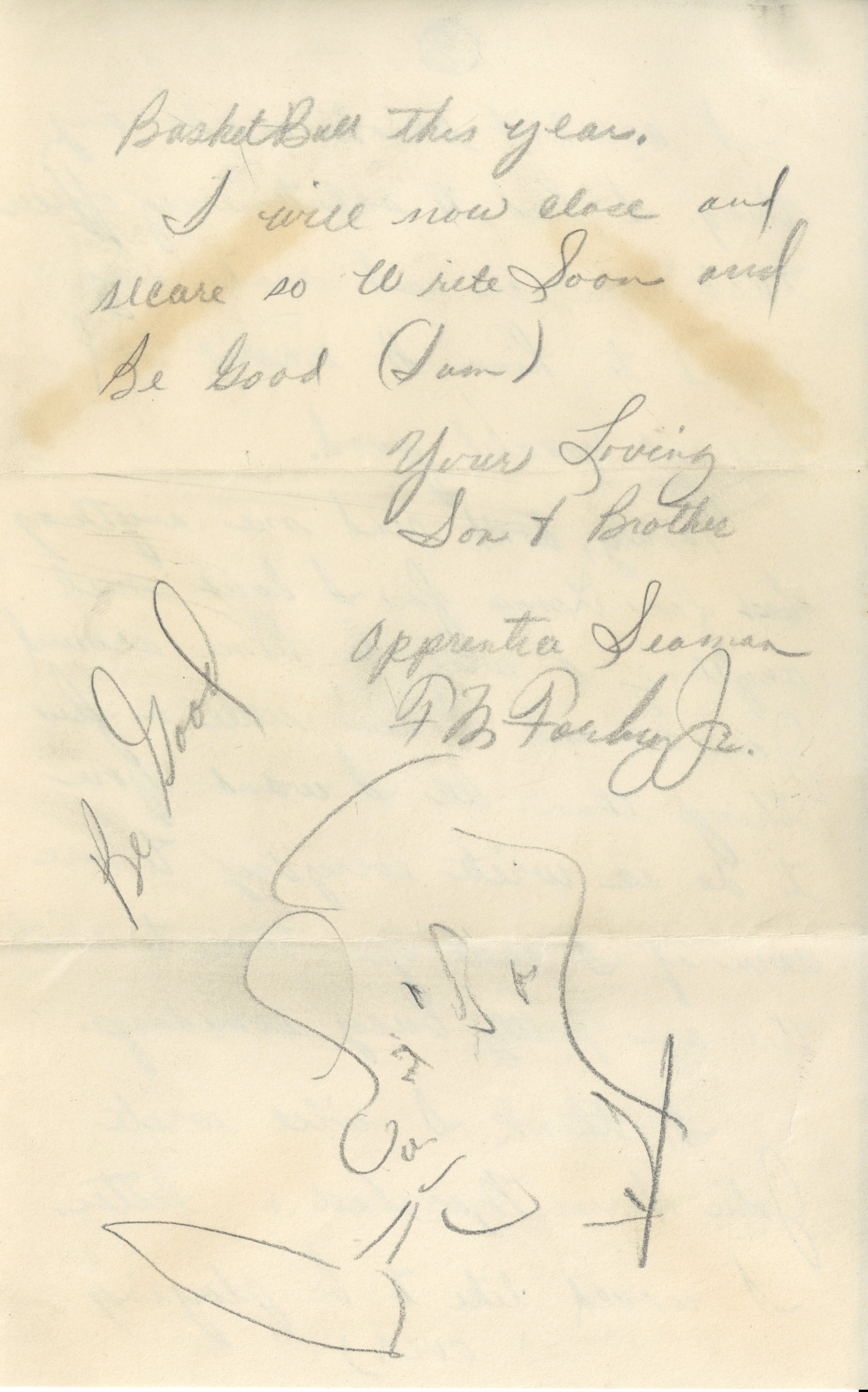 Forbey mentioned that this is the first time he hadn’t sent a letter since he has been at the Great Lakes. Forbey visited Camp Barry for a “Happy Hour” program. In this program he saw Eddie Howard with his orchestra from Chicago as well as Eddie Peabody, a banjo player who is “on the radio sometimes”. 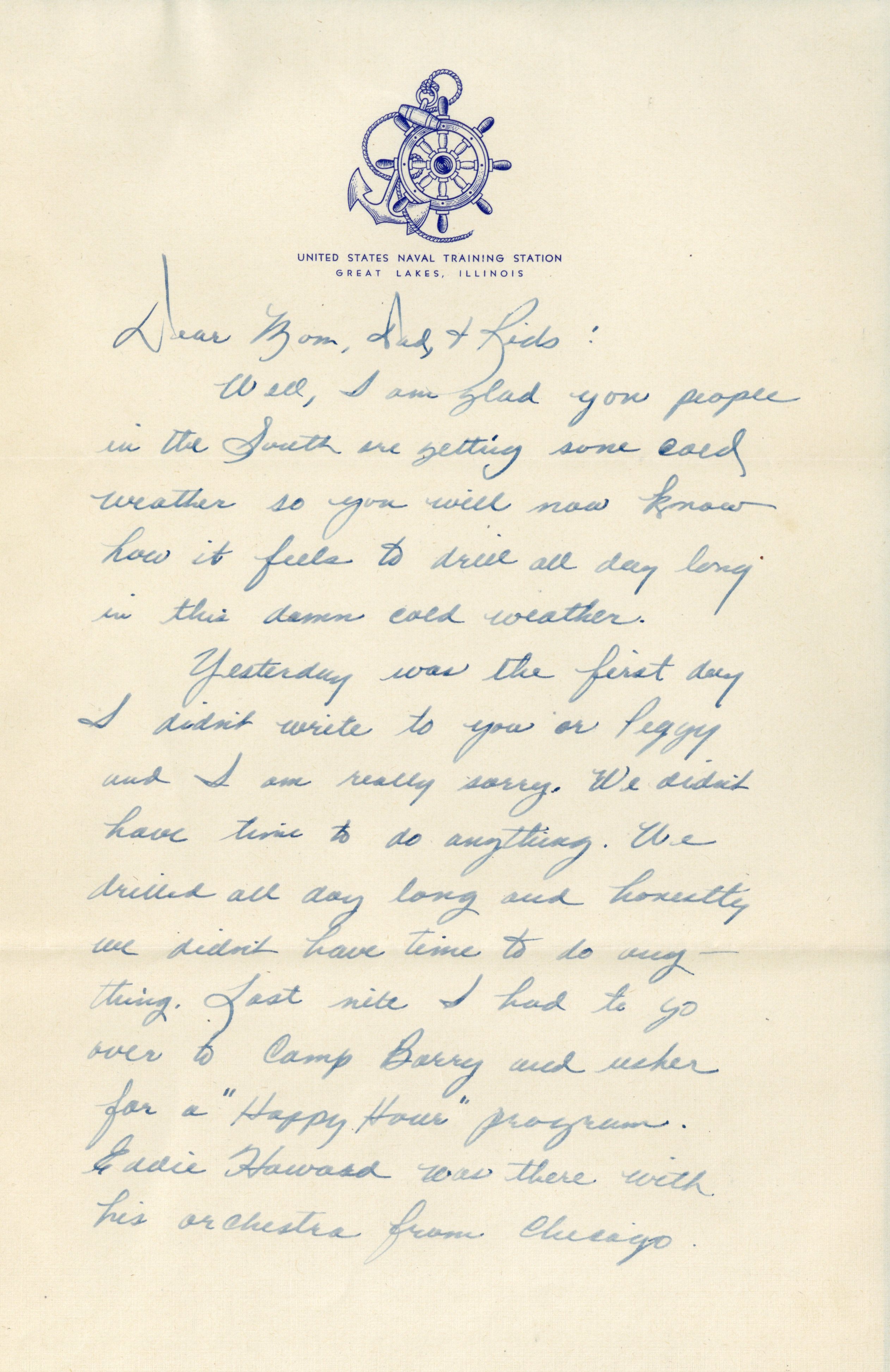 Well, I am glad you people in the South are getting some cold weather so you will now know how it feels to drive all day long in this dam cold weather. 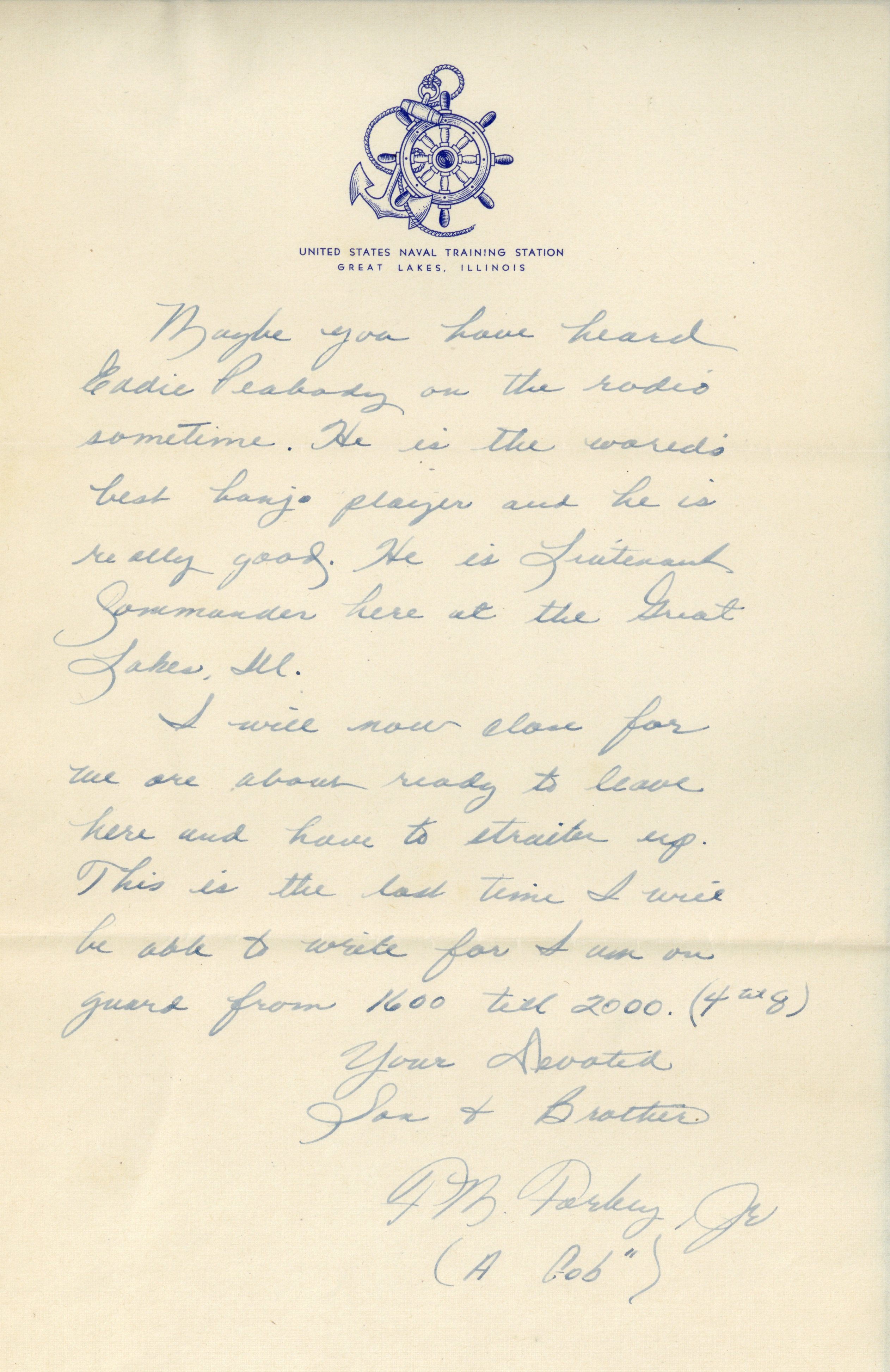 Maybe you have head of Eddie Peabody on the radio sometime. He is the worlds best banjo player and he is really good. He is Lieutenant Commander here at the Great Lakes, Ill.

While training in the Great Lakes, Forbey mentions several times the freezing temperatures, even suggesting it reached below zero temperatures and that man of the mens faces swelled from being so cold. Forbey mentions they were issued P coats but did not have other clothes to keep them warm. Forbey’s family sent him gloves and he tells them how grateful he is for it. 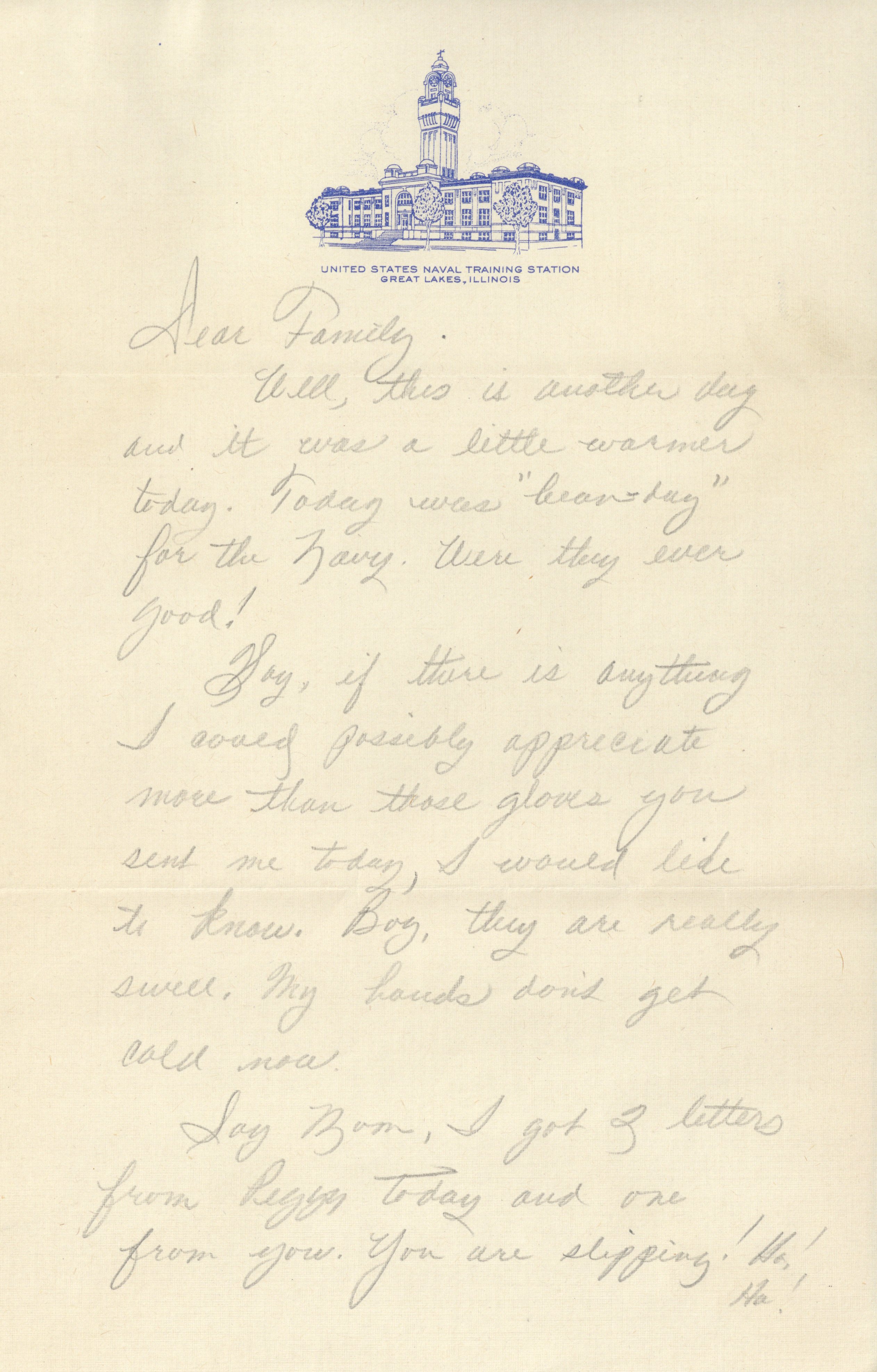 Well, this is another day and it was a little warmer today. Today was “bean-day” for the Navy. Were they ever good!

Say, if there is anything I could possibly appreciate more than those gloves you sent me today, I would like to know. Boy, they are really swell. My hands don’t get cold now.

Say Mom, I got 2 letters from Peggy Today and one from you. You are slipping! Ha! Ha! 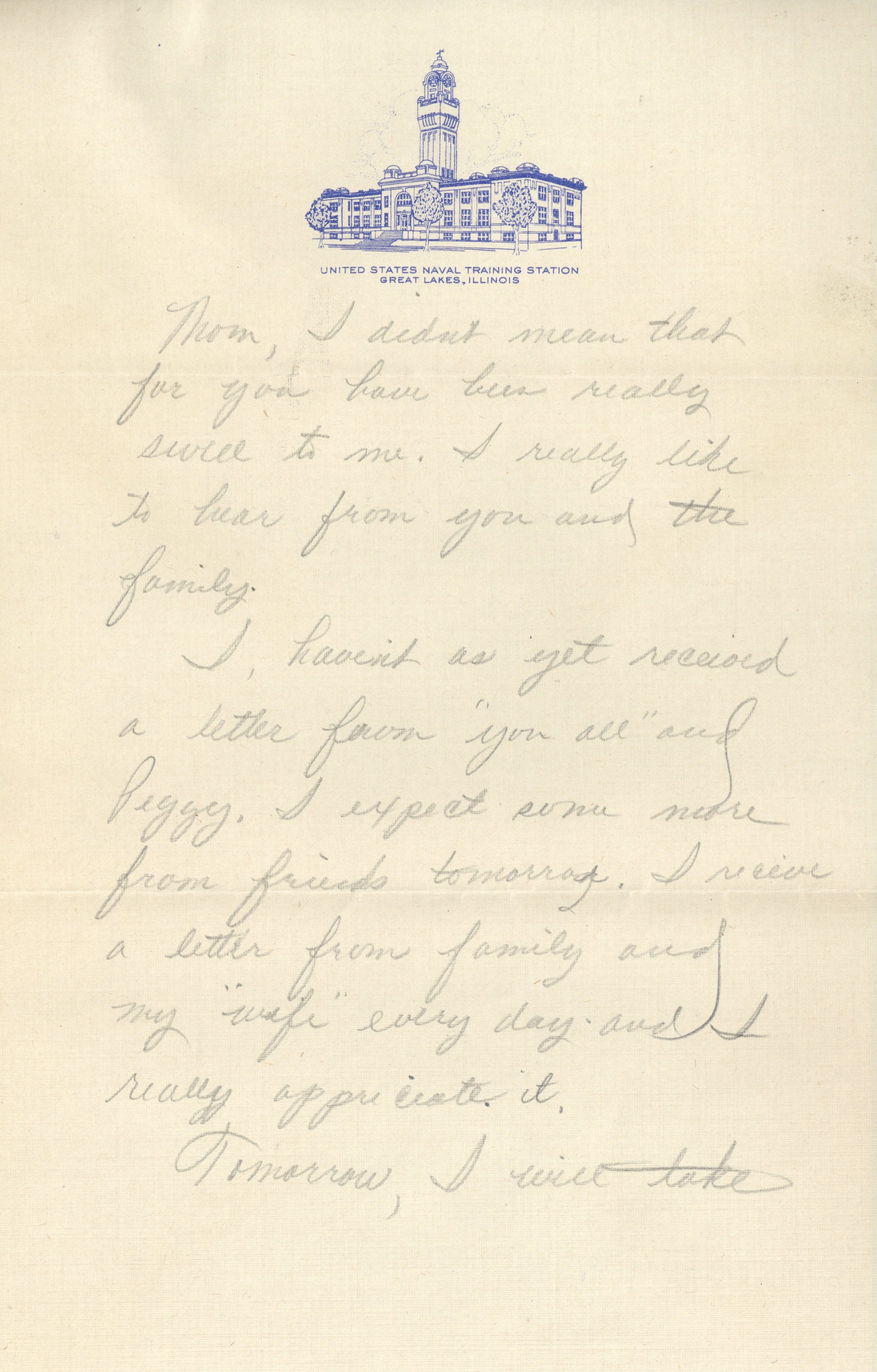 Mom, I didn’t mean that for you have been really swell to me. I really like to hear from you and the family.

I haven’t as yet received a letter from “you all” and Peggy. I expect some more from friends tomorrow. I receive a letter from family and my “wife” every day and I really appreciate it.

Tomorrow, I will take 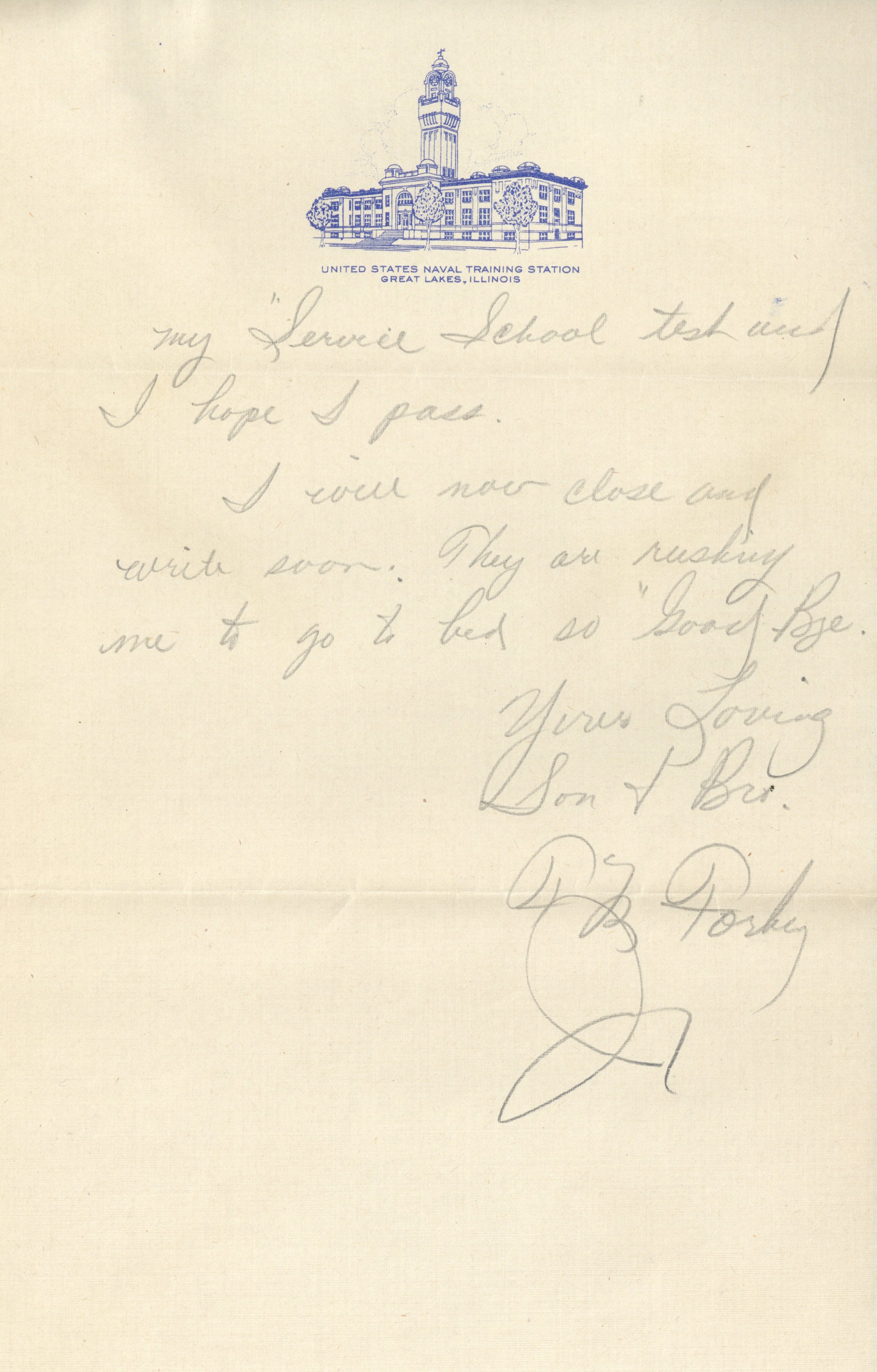 my “Service School test and I hope I pass. I will now close and write soon. They are rushing me to go to bed so “Good Bye.

After the new year, Forbey transitioned to using V-Mail service to send several of his letters but then later transitioned back to stationary paper. These came folded up and was only one page long. He mentions that he can purchase 50 V-mail letters for .06 cents, which was considered cheap, even for the time. 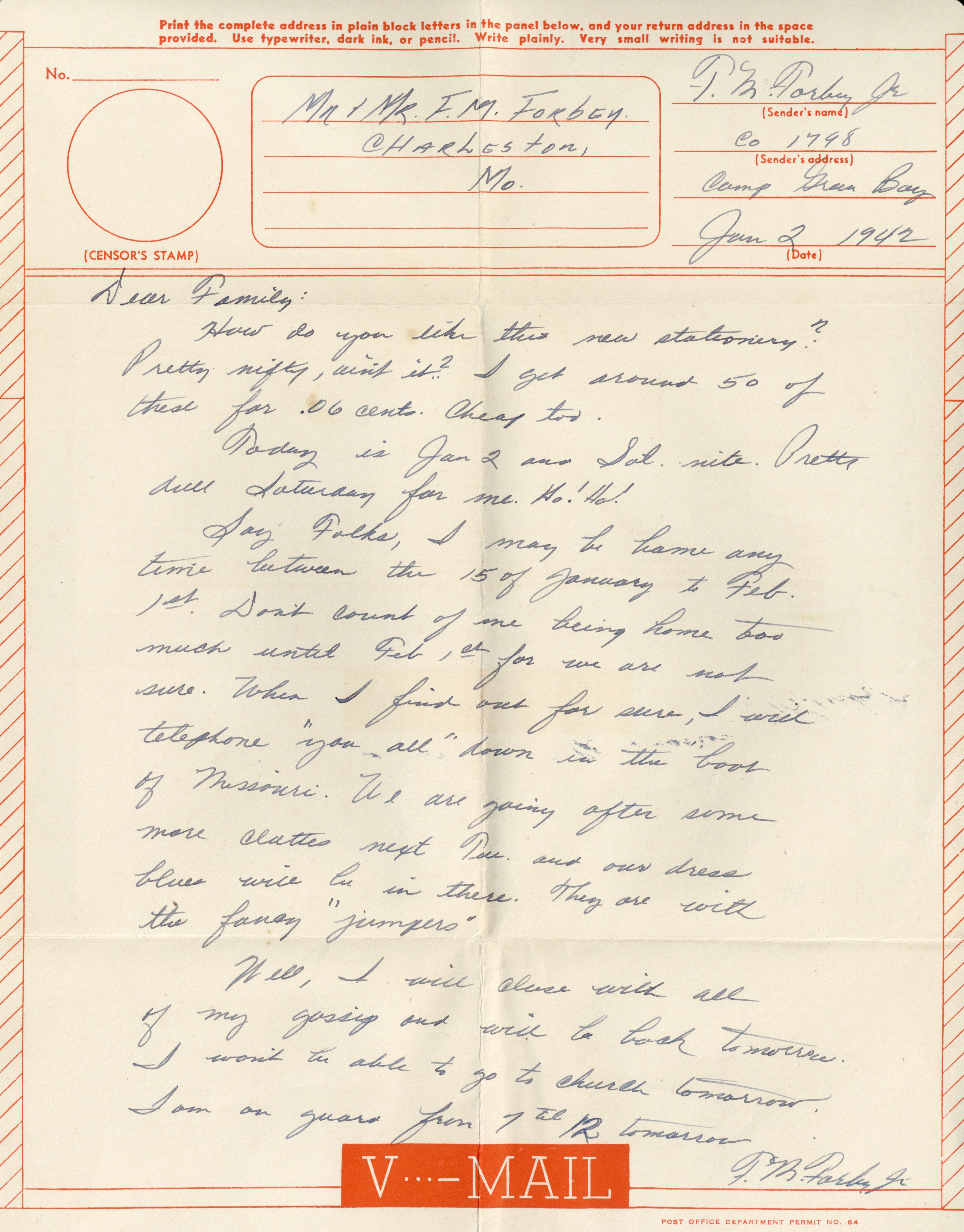 How do you like this new stationary? Pretty nifty, ain’t it? I got around 50 of these for .06 cents. Cheap too.

Today is Jan 2 and Sat. nite. Pretty swell Saturday for me. Ha! Ha!

Say Folks, I may be home any time between the 15 of January to Feb. 1st. Don’t count of me being home too much until Feb 1st for we are not sure. When I find out for sure, I will telephone “you all” down in the foot of Missouri. We are going after some more (clutter?) next Tue. And our dress blue will be in there. They are with the fancy “jumpers”.

Well, I will close with all of my gossip and will be back tomorrow. I won’t be able to go to church tomorrow. I am on guard from 7 to 12 tomorrow. 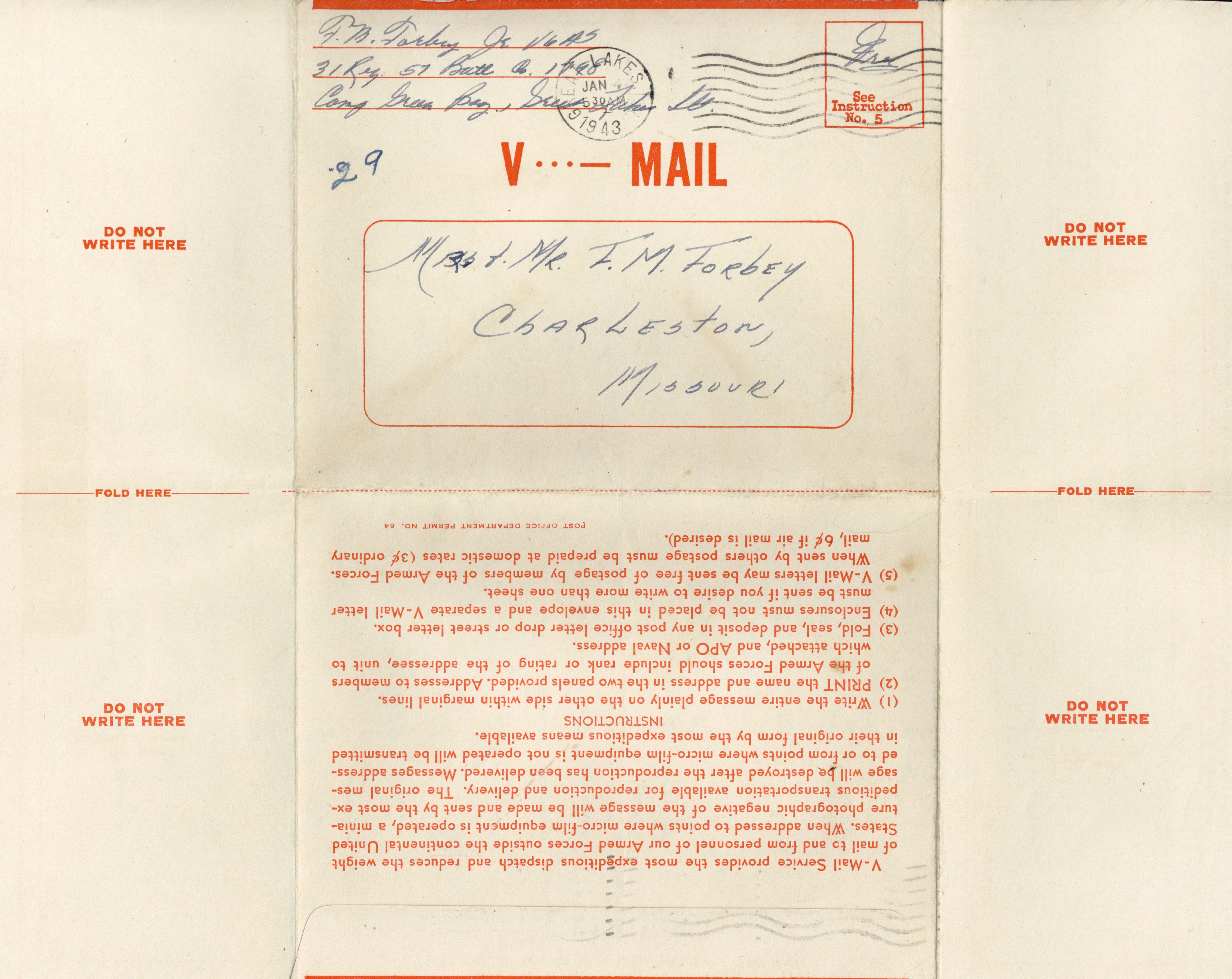 Back of the V-Mail Letter

Forbey wrote this poem sharing the hardships of the U.S. participating in World War II and his hopes for victory. This gives valuable insight into the realities many faced during the time. 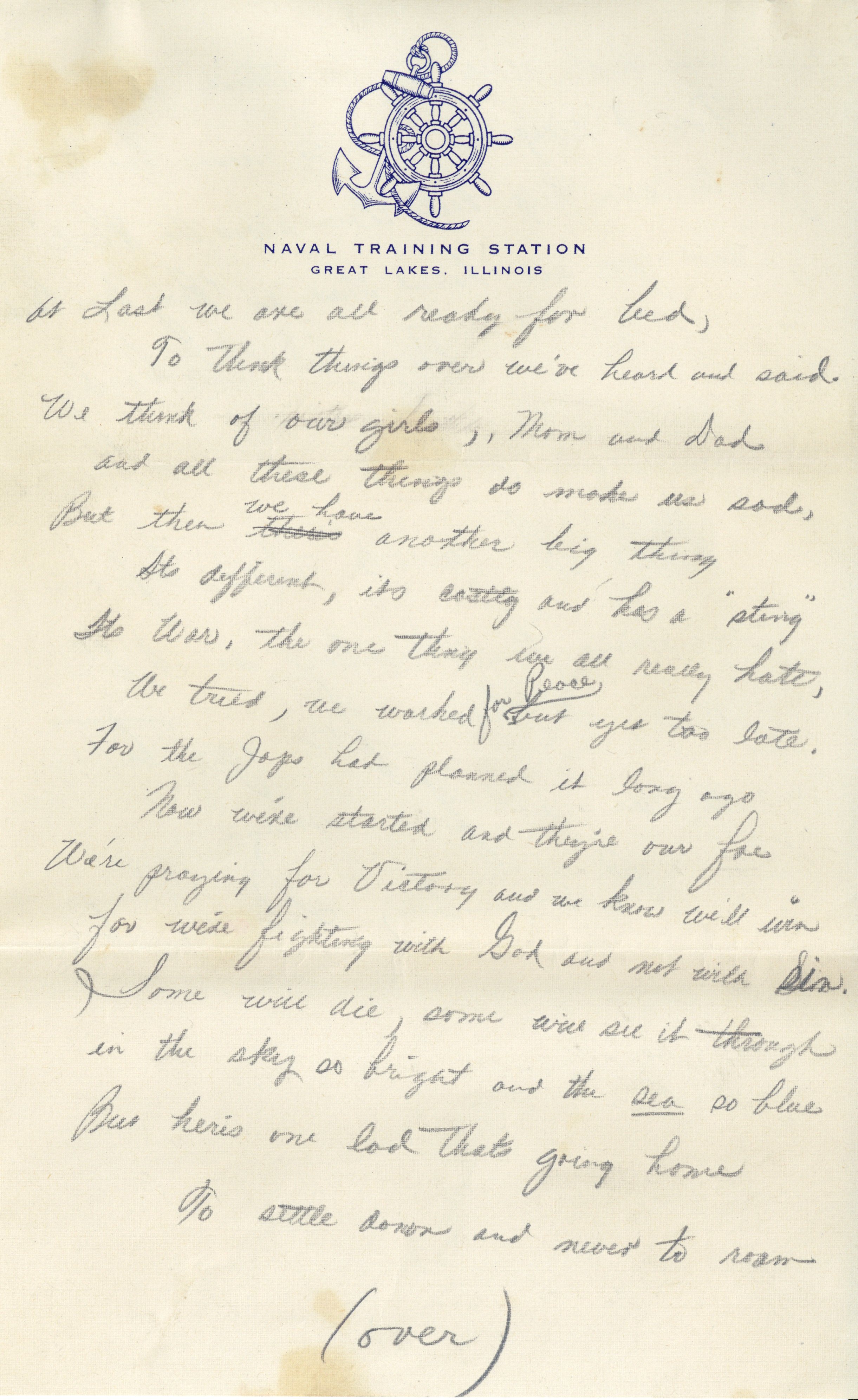 At Last we are all ready for bed,

To think things over we’ve heard and said.

We think of our girls, Mom and Dad

And all these things do make us sad,

But then we have another big thing.

It’s different, its costly and has a “string”

Its War, the one thing we all really hate,

We tried, we worked for Peace but yet too late.

For the Japs had planned it long ago.

We’re praying for Victory and we know we’ll win

For we’re fighting with God and not with Sin.

Some will die, some will see it through in the sky so fright and the sea so blue.

To settle down and never to roam. 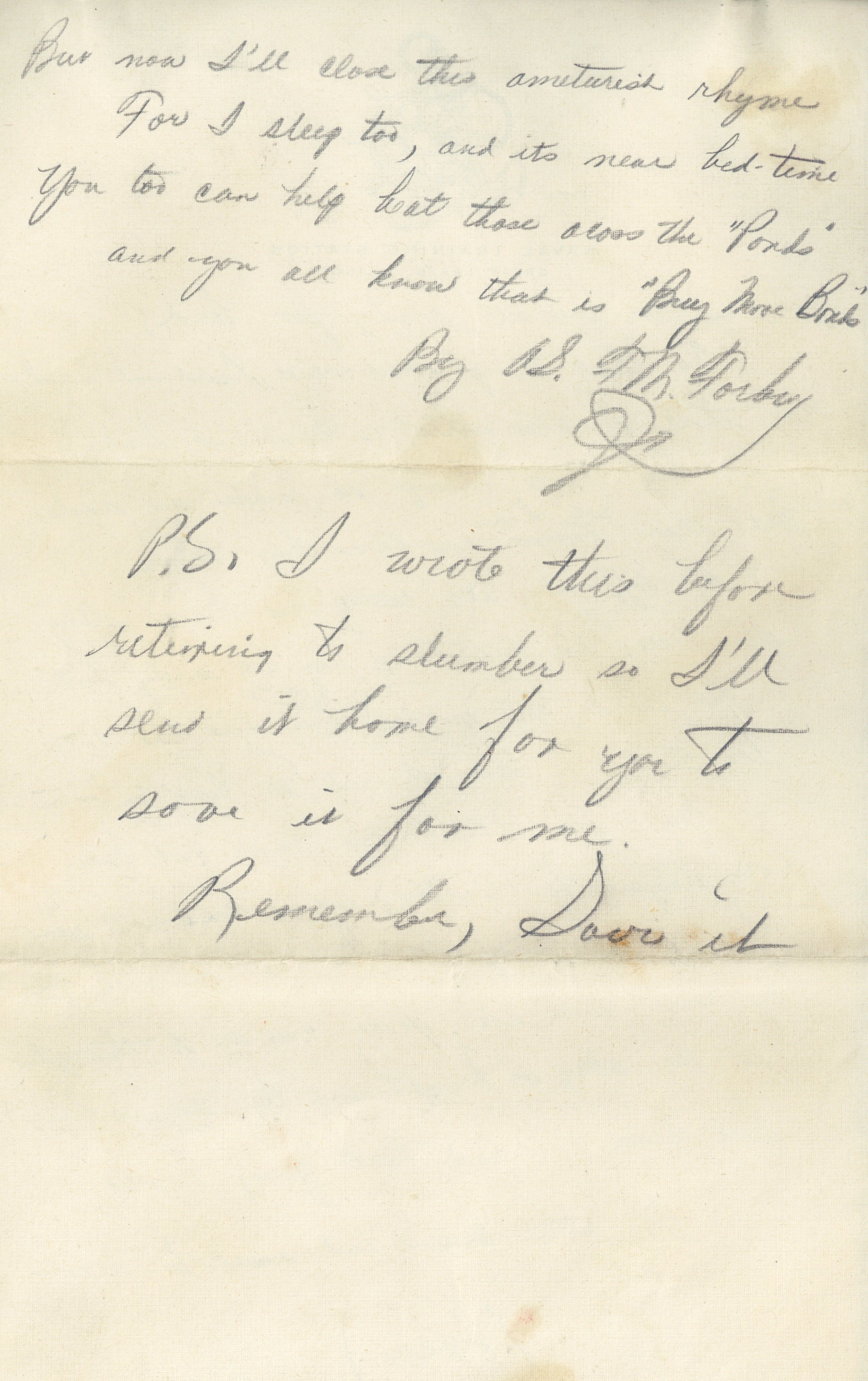 For I sleep too, and its near bed-time

You too can help hate(?) those across the “Ponds”

And you all know that is “Buy More Bonds”

P.S. I wrote this before returning to slumber so I’ll send it home for you to save it for me. Remember, Save it

Forbey wrote about making it into Trade School and becoming a Sound Operator. He was especially excited about this because there was only one person that made that position. Forbey mentioned going to a “Happy Hours” and an interviewer called Bob Elson who was a pioneering American sportscaster. The interviewee was Johnny Rigney who was a starting pitcher for the Chicago White Sox for his whole career but did not play during 1943-1945 to serve in the US Navy. 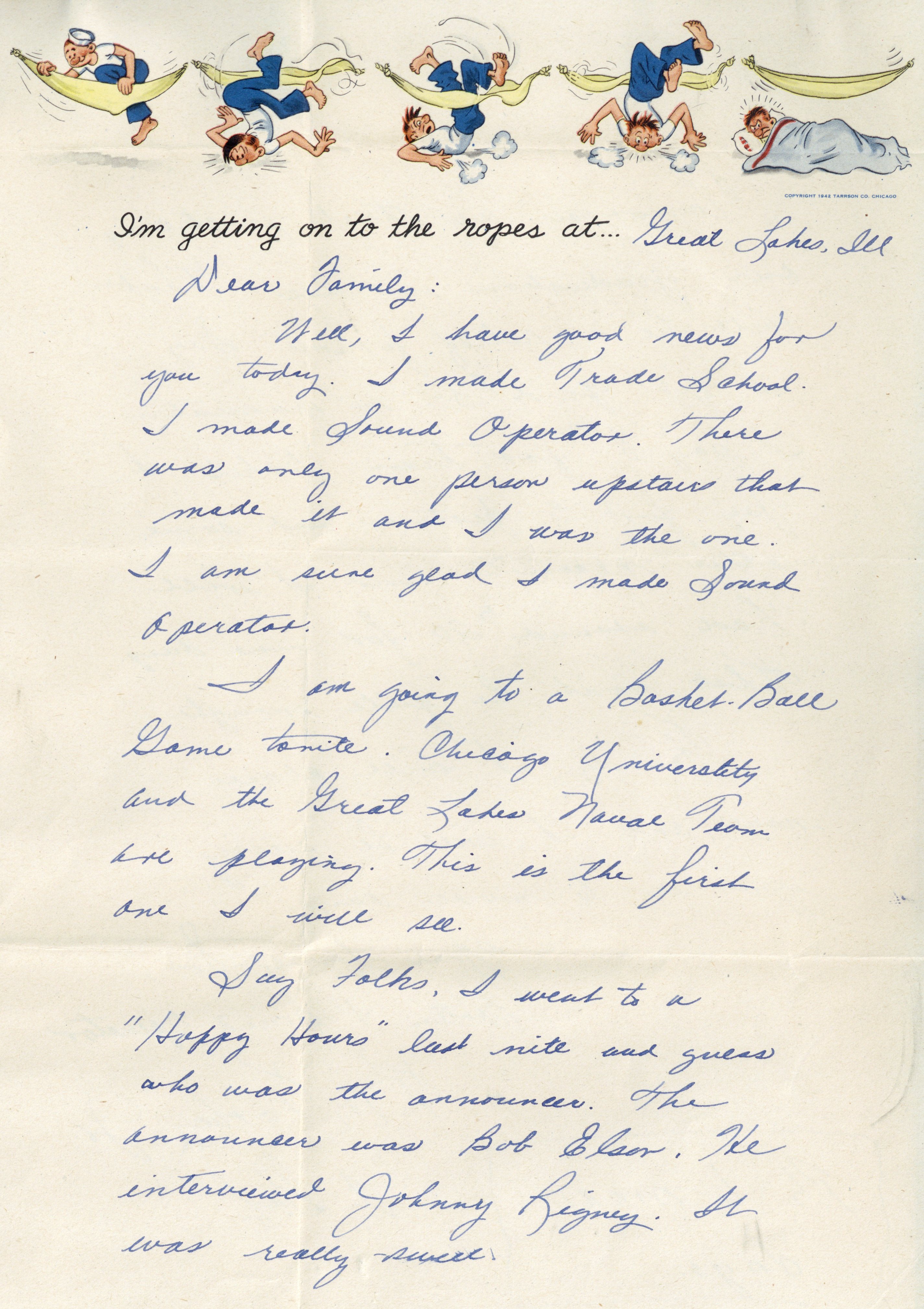 I am going to a Basket-Ball Game tonite. Chicago University and the Great Lakes Naval Team are playing. This is the first one I will see.

Say Folks, I went to a “Happy Hours” last night and guess who was the announcer. The announcer was Bob Elson. He interviewed Johnny Rigney. It was really swell 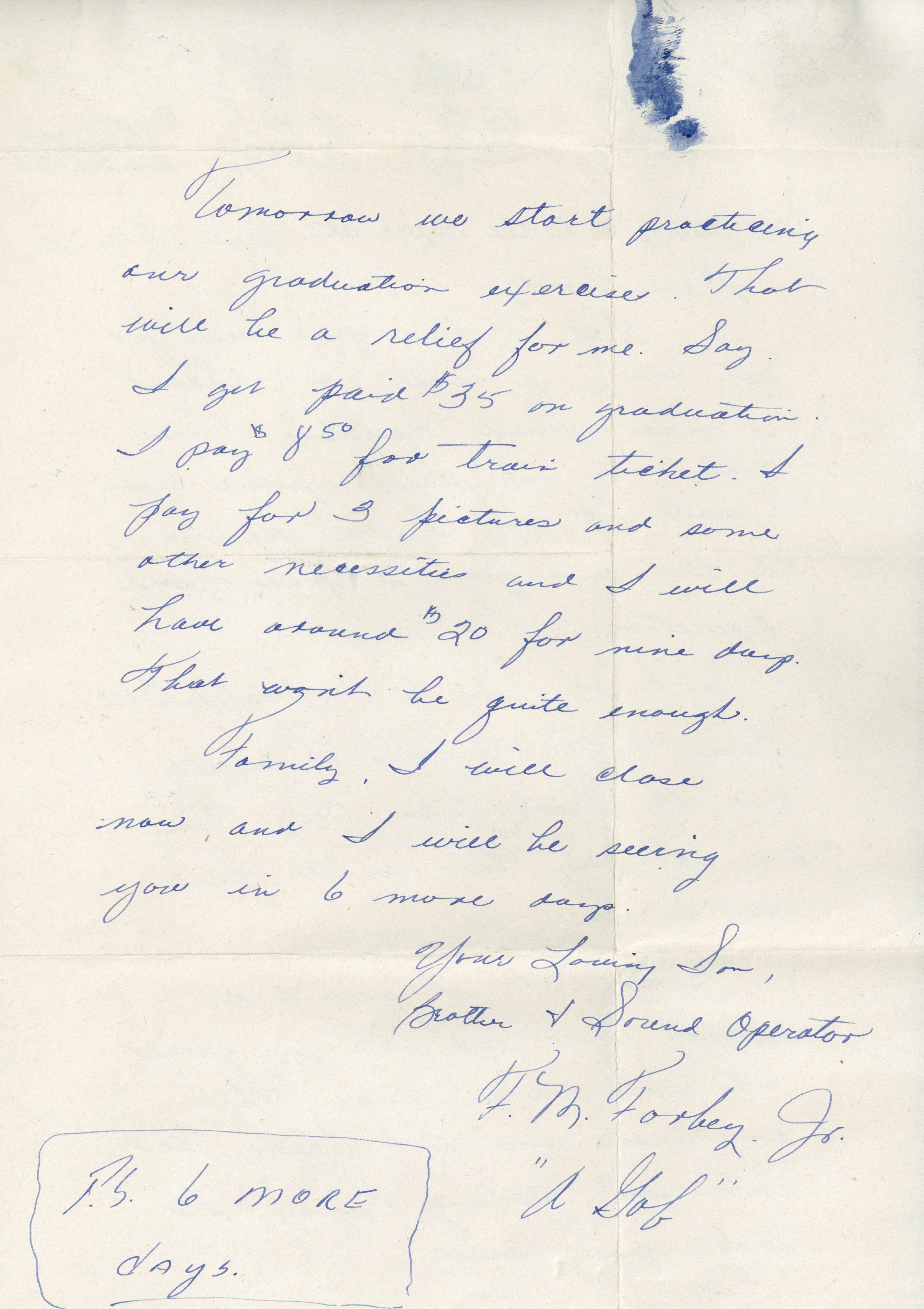 Tomorrow we start practicing our graduation exercises. That will a relief for me. Say I got paid $35 on graduation. I pay $8.50 for train ticket. I pay for 3 pictures and some other necessities and I will have around $20 for mine days. That will be quite enough.

Family I will close now and I will be seeing you in 6 more days.