ENG 202: Writing and Research in English

There are many perspectives from which an author’s works may be read, analyzed and evaluated. Our library offers ways into a range of these perspectives, including many individual volumes devoted solely to criticism of an author’s works or even of an individual work. It is crucial to know a volume of literary criticism when you see one; that is, to be able to tell that a certain book you have in hand is a book reflecting on and responding to an author’s work rather than, say, a biography of an author or an edition of an author’s work. The Twayne series of volume devoted to individual authors, for example, is mostly literary criticism, though each volume also contains biographical information on the author. To complicate things a bit further, there are also editions of author’s works that combine, say, a reliable text of a novel with literary criticism of the novel: the most well-known series of this type is the Norton Critical Editions. Finally, there are anthologies of important critical essays about an author, such as the Twentieth-Century Views series or the Chelsea House publications supervised by Harold Bloom.

If you’re looking for the most up-to-date criticism of an author’s work, though, you will not be as likely to find it in books as you will in scholarly journals. Our library’s databases are essential tools for leading you to such sources, and, for students of literature, an indispensable database for finding past and current articles about an author’s work is the MLA International Bibliography, which tries to list all the articles, dissertations and books published about hundreds of authors each year.

In general terms as they relate to the study of literary works, reviews are the least evaluative and are more of a summary of the work.

Criticism is a method of studying texts for the purpose of dating or reconstructing them, evaluating their authenticity, analyzing their content or style, etc. by any individual.

Critical Reception of a literary text or work is the analysis of how different individuals criticized (recieved) the work when it was published and at later dates.  Was it received favorably by the critics and general reading public or was it criticized harshly?  Was it a bestseller?  Did critics like it?  Do readers enjoy it?  Was it ever banned from schools?  Have reader's attitude's about the text changed over time?

Critical Reception of the Work

When the work first appeared, how was it received by readers and critics?  If it is a book or play, where was it reviewed and what were the reviews like?

One thing students of a particular author’s works often want to know is how the writer’s works were received by the public and by critics when they were first published and how they have been regarded since that time. It’s interesting to note, for example, that what many regard as an American classic, Herman Melville’s Moby Dick, received some mixed and unenthusiastic reviews when it first appeared. On the other hand, the public couldn’t wait for the latest installment of a Dickens novel like The Old Curiosity Shop to appear. (Dickens’ novels were usually published in serial form.) Reference works such as the Dictionary of Literary Biography or Nineteenth- or Twentieth-Century Literary Criticism will often provide an overview of a work’s publication history and reception. Other studies, such as those in the Critical Heritage series, will give a longer, more detailed account of how the regard for an author and the author’s works changed over the decades or centuries. Finally, book reviews in newspapers, magazines and journals offer invaluable perspectives not only on reception but on the cultural milieu in which a work first appeared.

1.  Do a 'LC Subject' Search of your author or the title of your work.

2.  On results page look for --Criticism and interpretation subheading.  There may be multiple instances since the subheading can be attached to multiple main headings (i.e. individual works by the same author) 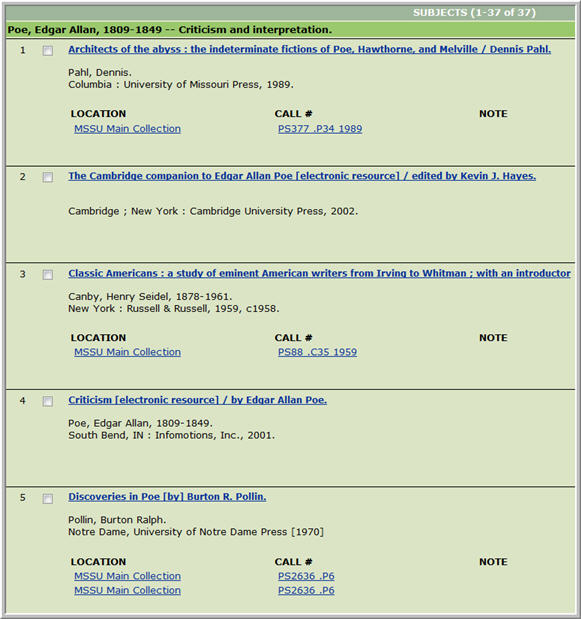 How to Use the Gale Criticism Print Series

To use, simply look up your author’s last name in the index (listed alphabetically), figure out what series and volume number the author is located in, and go to that source.