Alliteration:: repetition of consonants, vowels, and/or syllables in close proximity within a line.

Tyger! Tyger! burning bright,
In the forests of the night,
What immortal hand or eye
Could frame thy fearful symmetry?

In what distant deeps or skies
Burnt the fire in thine eyes?
On what wings dare he aspire?
What the hand dare seize the fire?

And what shoulder, and what art?
Could twist the sinews of thy heart?
And when thy heart began to beat,
What dread hand, and what dread feet?

What the hammer? What the chain?
In what furnace was thy brain?
What the anvil? What dread grasp
Dare its deadly terrors clasp?

When the stars threw down their spears,
And watered heaven with their tears,
Did he smile his work to see?
Did he who made the Lamb, make thee?

Tyger! Tyger! burning bright,
In the forests of the night,
What immortal hand or eye
Dare frame thy fearful symmetry?

Allusion: a reference to the person, event, or work outside the poem or literary piece.

In The Rape of the Lock

"Recall the description of Eve and compare to Belinda." (references both the Bible and Milton's Paradise Lost) 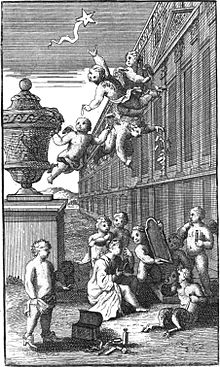 Assonance: a combination of similar vowel sounds in place of rhyme.

"In Xan a du did Ku bla Khan." by Coleridge

From: "First Principles of Verse" by Robert Hillyer

Something there is that doesn't love a wall,
That sends the frozen-ground-swell under it,
And spills the upper boulders in the sun,
And makes gaps even two can pass abreast.
The work of hunters is another thing:
I have come after them and made repair
Where they have left not one stone on a stone,
But they would have the rabbit out of hiding,
To please the yelping dogs. The gaps I mean,
No one has seen them made or heard them made,
But at spring mending-time we find them there.
I let my neighbor know beyond the hill;
And on a day we meet to walk the line
And set the wall between us once again.
We keep the wall between us as we go.
To each the boulders that have fallen to each.
And some are loaves and some so nearly balls
We have to use a spell to make them balance:
'Stay where you are until our backs are turned!'
We wear our fingers rough with handling them.
Oh, just another kind of out-door game,
One on a side. It comes to little more:
There where it is we do not need the wall:
He is all pine and I am apple orchard.
My apple trees will never get across
And eat the cones under his pines, I tell him.
He only says, 'Good fences make good neighbors'.
Spring is the mischief in me, and I wonder
If I could put a notion in his head:
'Why do they make good neighbors? Isn't it
Where there are cows?
But here there are no cows.
Before I built a wall I'd ask to know
What I was walling in or walling out,
And to whom I was like to give offence.
Something there is that doesn't love a wall,
That wants it down.' I could say 'Elves' to him,
But it's not elves exactly, and I'd rather
He said it for himself. I see him there
Bringing a stone grasped firmly by the top
In each hand, like an old-stone savage armed.
He moves in darkness as it seems to me~
Not of woods only and the shade of trees.
He will not go behind his father's saying,
And he likes having thought of it so well
He says again, "Good fences make good neighbors."

Concrete Poem: A poem that takes the shape of its topic.

Lord, Who createdst man in wealth and store,
Though foolishly he lost the same,
Decaying more and more,
Till he became
Most poore:

With Thee
O let me rise,
As larks, harmoniously,
And sing this day Thy victories:
Then shall the fall further the flight in me.

My tender age in sorrow did beginne;
And still with sicknesses and shame
Thou didst so punish sinne,
That I became
Most thinne.

With Thee
Let me combine,
And feel this day Thy victorie;
For, if I imp my wing on Thine,
Affliction shall advance the flight in me.

Consonance: the paring of words in which the final consonants of the stressed syllables agree but the vowels differ.

"struts and frets" by Shakespeare

There was a little hermit crab
Who thought his tank was rather drab
At first he didn't know what to do
Then decorated with pink and blue.
Now he is no longer crabby
With his new home, he's rather happy! 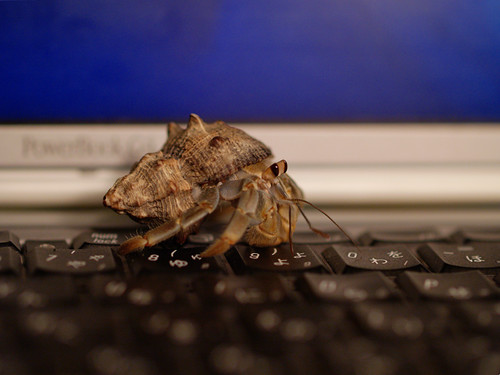 "hermit crab on my PB" by strollers is licensed under CC BY-SA 2.0

Free Verse: verse whose meter is irregular in some respect or whose rhythm is not metrical. 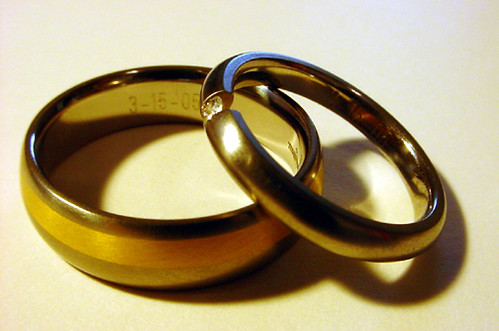 perhaps one should say enterprise
out of respect for which
one says one need not change one’s mind
about a thing one has believed in,
requiring public promises
of one’s intention
to fulfill a private obligation:
I wonder what Adam and Eve
think of it by this time,
this fire-gilt steel
alive with goldenness;
how bright it shows—

Iambic pentameter: a common meter in poetry consisting of an unrhymed line with five feet or accents, each foot containing an unaccented syllable and an accented syllable.

A verse that has an iambic pentameter with five iambic meter will have a rhythm pattern as follows:

A very good use of iambic pentameter rhyme scheme can be seen in the poem, Ode to Autumn by John Keats.

Batter my heart three-personed God, for you
as yet but knock, breathe, shine and seek to mend.
That I may rise and stand o'erthrow me and bend
Your force to break, blow, burn and make me new.

Metaphor: a figure of speech in which a word or phrase literally denoting one kind of object or idea is used in place of another to suggest a likeness or analogy between them.  Unlike a simile, metaphor does not use "like" or "as." 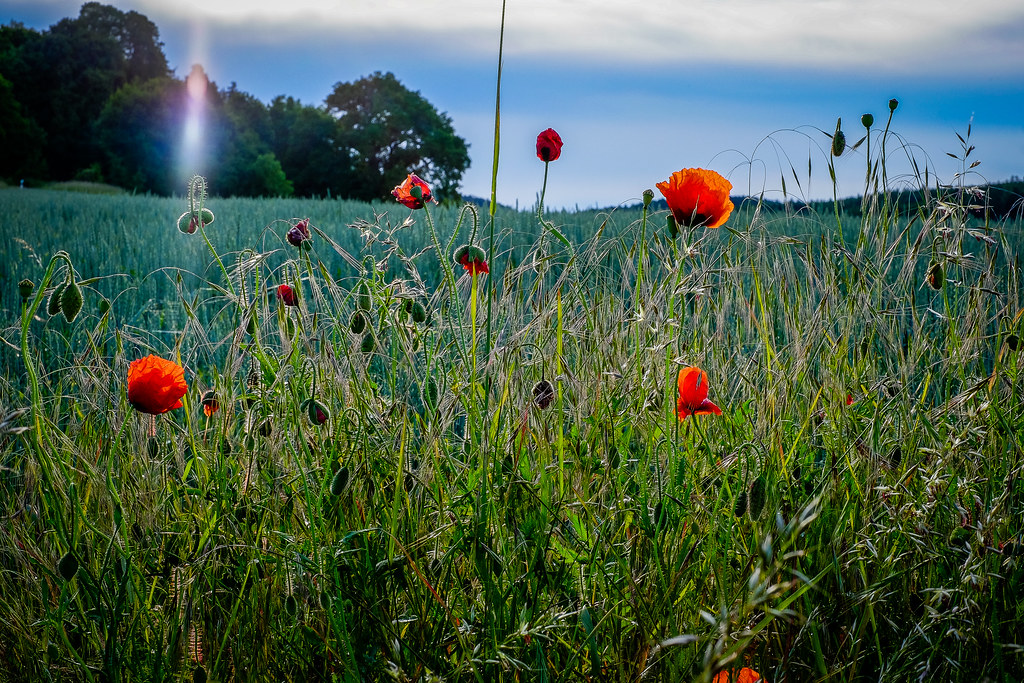 "Smell the summer" by mripp is licensed under CC BY 2.0

Shall I compare thee to a summer's day?
Thou art more lovely and more temperate:
Rough winds do shake the darling buds of May,
And summer's lease hath all too short a date:
Sometime too hot the eye of heaven shines,
And often is his gold complexion dimmed;
And every fair from fair sometime declines,
By chance, or nature's changing course untrimmed;
But thy eternal summer shall not fade,
Nor lose possession of that fair thou ow'st;
Nor shall death brag thou wand'rest in his shade,
When in eternal lines to time thou grow'st:
So long as men can breathe or eyes can see,
So long lives this, and this gives life to thee.

"The Brain is wider than the sky" by Emily Dickinson

William Yeats is laid to rest" by W. H. Auden

"And the peak of the mountains was apples, the hugest that ever were seen,

And they prest, as they grew, on each other, with hardly a  leaf between." by Tennyson

After the pangs of a desperate lover,

When day and night I have sighed all in vain,

Ah what  a pleasure it is to discover

In her eyes pity, who cause me pain" by Milton

Onomatopeia: the naming of a thing or action by a vocal imitation of the sound associated with it. 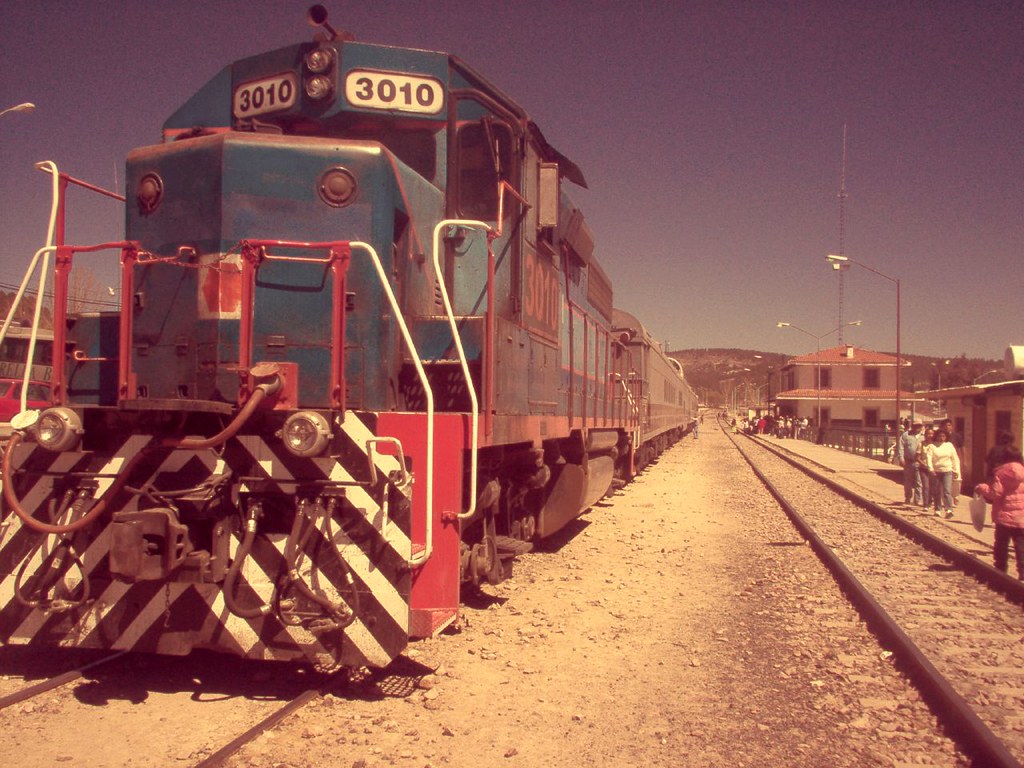 I like to see it lap the miles,
And lick the valleys up,
And stop to feed itself at tanks;
And then, prodigious, step

Around a pile of mountains,
And, supercilious, peer
In shanties by the sides of roads;
And then a quarry pare

To fit its sides, and crawl between, Complaining all the while
In horrid, hooting stanza;
Then chase itself down hill

And neigh like Boanerges;
Then, punctual as a start its own,
Stop-docile and omnipotent-
A stable door.

Quatrain: a poem or stanza of four lines, usually with alternating rhyme scheme.

She Sweeps With Many-Colored Brooms

She sweeps with many-colored Brooms—
And leaves the Shreds behind—
Oh Housewife in the Evening West—
Come back, and dust the Pond!

You dropped a Purple Ravelling in—
You dropped an Amber thread—
And how you've littered all the East
With duds of Emerald!

And still, she plies her spotted Brooms,
And still the Aprons fly,
Till Brooms fade softly into stars—
And then I come away— 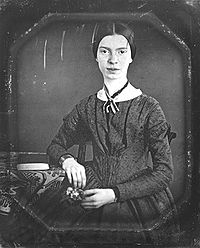 Simile: a figure of speech comparing two unlike things that is often introduced by "like" or "as."

An emerald is as green as grass,
A ruby red as blood;
A sapphire shines as blue as heaven;
A flint lies in the mud.

A diamond is a brilliant stone,
To catch the world's desire;
An opal holds a fiery spark;
But a flint holds a fire. 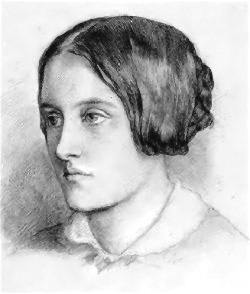